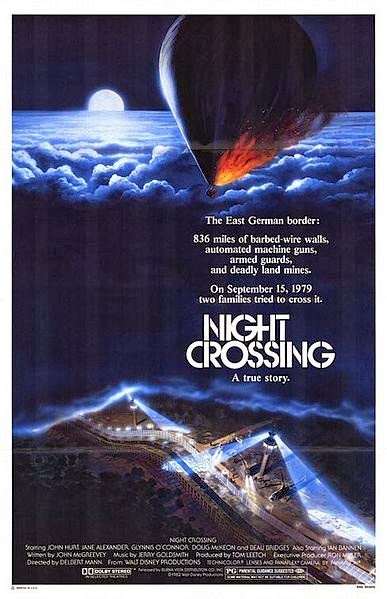 I've always been fascinated by Disney's "dark" period, which commences with The Black Hole in 1979 and winds up with the catastrophic failure of The Black Cauldron in 1985. Now Disney has always leavened its family films with elements of darkness and horror, but in that six-year period they went on the most peculiar bender of horror, shocks, mature concepts, violence and other comparatively confronting material. In The Black Hole you have cyborg zombies and someone getting murdered by effectively having a chainsaw shoved through their chest. The Watcher in the Woods (1980) has supernatural mayhem and a genuine sense of menace. Dragonslayer has live human sacrifice and an unbelievably cynical take on Christianity. In Return to Oz there's electric shock therapy and a witch who wants to cut off Dorothy's head and wear it like a hat. Almost certainly the best of this crop of films is Jack Clayton's 1983 thriller Something Wicked This Way Comes, based on the Ray Bradbury novel. It has top-notch performances by Jonathan Pryce and Jason Robards, a cracking plot and a distinctive sense of creeping dread.

One film from the period I hadn't seen until recently was Night Crossing, a 1982 drama based on the true story of two East German families attempting to defect to the West in a hot-air balloon. Before I saw it I had always thought it was an odd choice of film for Disney to make. Having now seen it, it fits in quite perfectly. There's implied torture. There's a prolonged sense of menace and paranoia. There's the brutal on-screen murder of a teenage boy.

But that's Disney for you: overly sweet and cloying, saccharine, ruthlessly commercial. Except, you know, if you actually watch their films.

John Hurt stars as electrician Peter Strelzyk, who hatches the ambitious plan to escape East Germany by secretly constructing and building a hot air balloon. It seems redundant to say that he's very good: it's John Hurt, for goodness sake. I don't think he's given a substandard performance in his life. There is one particular scene, when things seem particularly hopeless, where Strelzyk slowly breaks down and bursts into tears. It's an unexpectedly mature moment for what is evidently supposed to be a family film.

The supporting cast is uniformly excellent, particularly Jane Alexander as Strelzyk's wife Doris and Beau Bridges as his conflicted best friend Günter. For those playing "where have I seen them before" at home, the film's antagonist - the driven Major Koerner - is played by Günter Meisner who memorably played Slugworth in Willy Wonka and the Chocolate Factory. He has the face that pretty much demands he plays frightening and unforgiving villains.

The story is relatively predictable, but then it is ostensibly a family film so I wasn't expecting anything too left-of-field. The end is also a foregone conclusion, really, but director Delbert Mann (this was his final film) still manages to extract an enormous amount of suspense from the film's final half hour.

There's a peculiar problem throughout the film with accents. English cast members use their English accents. The Americans all sound American. Germans sound German. Ian Bannen, who has a brief part, can't hide his own Scottish accent. It all takes a little getting used to.

There's one scene in the film that sticks with me. It's very early on, and is very much the story's inciting incident, so I don't mind spoiling it for you. A teenage boy tries to break through the border crossing using a stolen bulldozer. He's shot to pieces by machine gun-wielding guards. They go to collect the body, and one of the guards exclaims that the boy is still alive. 'So leave him for a while,' says the guard captain, 'we'll pick up the body later.'

Oh Disney. So sweet. So saccharine.

This is the 700th post of The Angriest. Thank you for continuing to read what I write.
Posted by Grant at 8:51 AM