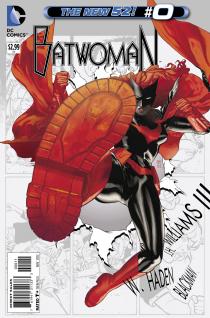 It's been a while since I've done one of these, so I figured I'd talk about one of the really good ones.

One of the New 52 titles I was most desperate to start reading back in September 2011 was Batwoman. A Batwoman book had been a long time coming: she was first introduced in the pages of DC's weekly epic 52 in June 2006, in a showy debut that made the mainstream entertainment press in the USA. DC promised a monthly book pretty much as soon as she arrived, but it took until 2009 for her to finally make her proper entrance in a 10 issue arc on Detective Comics. It was the first time since 1939 that someone other than Batman had been the star of that book.

Despite continued assurances that a regular Batwoman book was coming, it wasn't until November 2010 that the first issue finally shipped. It was a zero issue prologue, co-written by artist J.H. Williams III and W. Haden Blackman. The monthly follow-up was delayed, and delayed, and then the New 52 was announced and DC simply held the book back by a few more months to give it a simultaneous launch with the other 51 monthlies.

Once we all finally got the chance to read Batwoman, it turned out to be an absolutely stunning work of superhero fiction. It follows one of the most interesting and emotionally flawed superheroic characters out there, and features what is almost certainly the best artwork and panel layouts in mainstream comics today. A lot of readers and critics focused on how great it was to have a lesbian as the star of a comic book. I was more impressed by how many women she is surrounded by, and how neither her sexuality nor her female cast feel tacked on, unusual or sensationalistic.

Williams and Blackman revived Cameron Chase, one of the most intriguing and underrated DC characters of the 1990s, and gave her a second chance at comics stardom. They brought in Wonder Woman for a lengthy story arc, and wrote her as pretty much the best written Wonder Woman since Greg Rucka was writing Wonder Woman several years ago. 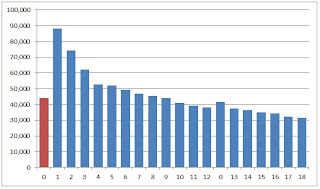 One of the things that's most impressive about this book is how, despite being a Batman spin-off, it has never been tied to the "Batman family". Batwoman steered clear of "The Night of the Owls", and "Death of the Family", although that's a choice that may come back to bite its creative team and DC's editors.

As you can see in the sales chart, despite some of the best writing and art in the business, and almost certainly the best combination of writing and art across the New 52, Batwoman is shedding readers. It's losing an average of about 1,500 of them each issue, an attrition rate that will see the book cancelled by issue #30 if things don't stabilise. As it hasn't had the opportunity to bump its sales with crossovers, it's had nothing to rely on but its quality and on readership word-of-mouth. In a market that craves novelty, that may not be enough.

No matter how long it lasts, nothing can take away from the fact that Batwoman is the best book of the New 52 and a must-read. The first two volumes are out in hardcover (and the first in paperback as well), so if you haven't been reading it check it out and see what you think. I can't get enough: long may Kate Kane's adventures continue!
Posted by Grant at 9:28 AM