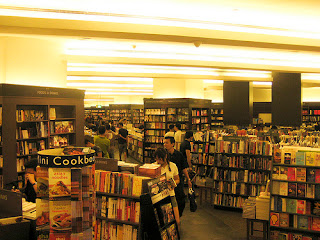 Okay, here's the comic reviews for two weeks ago. I'm slowly catching up.

There's a great bookshop in Singapore, a Japanese chain named Kinokinuya. On Orchard Road there's a branch of this bookshop that just stretches on and on. It's apparently the largest bookshop in the Southern Hemisphere, which I believe. I popped inside to check it out, and got lost trying to find my way back to my wife. When I popped in for a second time I actually got lost again. No joke: this is a bookshop that is actually so damned large that you can get honest-to-god lost inside it.

The graphic novels section alone is about the size of an Australian bookstore, and seeing so many books on the shelves at the same time really brought home just how much stuff is getting published these days out of the USA alone. Just between DC and Marvel there must be something like 130 monthly comics published, and that doesn't include graphic novels and the like. Add in Image, Dark Horse and the other independents, and American comics are simply too large for one person to really tackle any more.

I worry sometimes that this column just reviews the same titles month in, month out, but to be honest it would be too time consuming and expensive to read much more than I already do.

Under the cut: reviews of Action Comics, Age of Ultron, Batwing, Bedlam, Detective Comics, Green Lantern, Red She-Hulk, and Stormwatch. I plan to get Worlds' Finest but my local comic shop had sold out, and I'd rather not buy a digital version if I'm still looking for a print copy.

This issue really pops off the page, with excellent art by Tony Daniel and a strong opening script by Andy Diggle. Following up from Grant Morrison must be a daunting task for any writer, but Diggle wisely pushes the book in his own direction with Lex Luthor finally taking centre stage as a proper Superman villain again. Of course for reasons unknown Diggle has already resigned as replacement writer, leaving Daniel to pick up the reins himself. I adore Daniel's art, but I've never warmed to his writing. DC need to work fast to fix this book before any momentum this issue gained is wasted. (4/5)

The big difference between a book like Age of Ultron and a book like Animal Man, both of which feature dystopic futures where all the superheroes have died, is that Age of Ultron is actually showing the deaths rather than simply alluding to the fact that they've already happened. This gives the book an edge and an immediacy that you simply didn't get with Animal Man's "Rotworld" arc. Now that we're a good distance into the book, I'm very happy I took a chance on buying it. (4/5)

David's story appears to come to an end as he ties up loose ends, meets with Batman and resigns from Batman Incorporated. Fair enough, and if this book ended with this issue it would be a reasonably satisfying conclusion to an inventive and groundbreaking superhero comic. Unfortunately we're continuing next month with a new Batwing (an American, who I shall not name lest I spoil it for you) using a new and improved suit. So why didn't Batman give David the improved suit? Why is an American the only replacement for an African to fight crime in Africa? There's a nasty stink of post-colonialism in the end of this book that I don't like. This book walked such a careful line for the first 19 issues between using an African setting effectively and not exploiting it. It seems that's likely to change. I get that Gray and Palmiotti are taking over as writers from next month, and that they probably want a fresh direction to boost sales, but I can't help but feel they've thrown the baby out with the bathwater on this one. (2/5)

The first story arc concludes here, and so far the book's been a sensational ride. This story of a diabolical villain secretly turned helpful police assistant has been in turns funny, dramatic and deeply creepy. Sadly this is the last issue to feature art by Riley Rossmo, and that's a deep shame. Creative differences have seen him depart, and I can only hope his replacement in issue #7 is as stylish, evocative and eye-catching as he is. Wherever he goes in future, I'm going to try and make a point of following him: his stuff is awesome. (4/5)

DC advertised this one as an 80-page giant, but let's be clear: it's technically a 60-page giant with some extra pin-up art scattered throughout. The main storyline takes up about 26 pages, and the remaining 34 are devoted to backstory and a pointless prologue to Talon that's entirely out of place in an issue of Detective Comics. Is the core story any good? Absolutely. It introduces Man-Bat into the New 52 while continuing to push along Layman's "Emperor Penguin" story arc. Is this book worth US$7.99 for the privilege of reading it? Almost certainly not. I get that DC wanted to exploit the fact that this was the 900th issue of Detective Comics, but they didn't need to exploit the readership's wallets at the same time. (3/5)

Geoff Johns got me all excited about Green Lantern again by introducing Simon Baz. Now that I'm reading it, he's deftly - and irritatingly - shoved the focus back onto Hal Jordan and Sinestro. I honestly don't think there is a DC Comics superhero as dull as Hal Jordan, particularly when Johns constantly writes him as if he's the greatest hero the DC Universe ever had. If this book had stuck with Baz I'd be singing its praises. Instead I'm waiting for Johns' run to end. Sadly I've read online that the next creative team isn't likely to focus on Simon either. (2/5)

Betty and Machine Man must face the son of Mole Man if they are to find an underground entrance to the ancient order of SHIELD. This continues to be a great book with underrated protagonists (She-Hulk - the green one - finally makes a proper entrance this month) and rock-solid dialogue. This issue doesn't go in the direction I expected it would, and the cliffhanger ending was a real surprise. This is one of those hidden gems that a select few of us wait to read each month - more of you should check it out. (4/5)

Okay, I simply don't understand what is going on here. This issue sees the entire universe quietly rebooted and an entirely new, significantly less interesting Stormwatch team introduced. The thing is, there's nothing in this issue to really suggest that the old team is likely to come back; it's more like DC simply looked at the poor sales figures, drew a line in the sand and told new writer Jim Starlin to come up with something new. He's come up with something dreadfully generic. I've been on the fence on this book since it launched, always almost cancelling my order and then finding a worthwhile issue that would give me hope things are picking up. This is probably my cue to drop it for good. (1/5)

Winner of the Week: No five-star comics for this week. Of the four-star issues, I think my favourite was probably Age of Ultron.
Loser of the Week: Jim Starlin's new Stormwatch. Oh should I call it Snorewatch? Heh, get it? Get it? Seriously: this whole paragraph is more entertaining than the new Stormwatch.
Posted by Grant at 6:33 PM