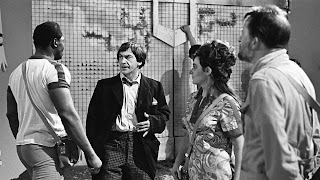 Who50 counts down to the 50th anniversary of Doctor Who by reviewing my favourite episodes and serials over the history of the programme, counting down from #50 to #1. Today, #27: "The Tomb of the Cybermen", a 1967 four-part serial written by Kit Pedler and Gerry Davis and directed by Morris Barry.

The Doctor, Jamie and Victoria arrive on the icy planet of Telos, where a human expedition seeks to unlock and explore the long fabled 'tomb of the Cybermen'. Once inside, however, and due in no small part to the Doctor's machinations, the expedition discovers that the Cybermen may not be as dead as they first appeared.

By 1967 Doctor Who was in firm need of a new monster. By the end of Season 4 the Daleks had been written out of the series for good (or so the production team assumed),  leaving a prominent pepperpot-shaped hole. There had been numerous attempts throughout the first four seasons to produce more popular monsters: Terry Nation had tried twice with the Voord and the Mechanoids, one of which failed to capture public interest and the other proved too large to easily use in the small BBC studios in which Doctor Who was recorded. The Cybermen, a humanoid species of emotionless cyborgs, had been created by scientist Kit Pedler and writer Gerry Davis for the Season 4 serial "The Tenth Planet", and had proved remarkably popular - so popular, in fact, that within a few months they were brought back mid-season for "The Moonbase". This made them the third enemy to warrant a return appearance, after the Daleks and the Meddling Monk.

"The Tomb of the Cybermen" was the opening serial of Doctor Who's fifth season, and they marked a sea change in how the show was written, presented and ultimately received by its audience. By this stage Patrick Troughton was well established in the role of the Doctor, allowing the focus to fall entirely on the Cybermen. Here they are defined as one of the Doctor's greatest foes, second only to the Daleks themselves, and they paved the way for the series to feature not just Daleks in among a string of one-off adversaries but an entire cavalcade of returning monsters, villains and characters. Future serials would introduce the Ice Warriors, the Great Intelligence and the Yeti, UNIT and Brigadier Lethbridge-Stewart, the Silurians and Sea Devils, Sontarans, the Master, the Rani, Sil, Sabalom Glitz, Slitheen and Weeping Angels.

For many viewers over the past five decades Doctor Who has been a series about monsters, and it is with "The Tomb of the Cybermen" that this impression of Doctor Who begins. Here they're not represented, as they are in their first two outings, as a science fiction concept: dehumanised cyborgs, to be pitied as much as feared. Here they're out-and-out monsters: the episode two cliffhanger, in which the Cybermen awake from their tombs and slowly tear their way from their coffins, is one of the best and most iconic cliffhanger endings in Who history.

The Cybermen are ultimately a Troughton era monster. Despite their return appearances to fight the fourth, fifth, sixth, seventh, tenth and eleventh Doctors, it is against Troughton that they made their first significant impact and against Troughton that they fought the majority of their battles. Consider this: from 1966 to 1969 Patrick Troughton played the Doctor in 119 half-hour episodes, and he battled the Cybermen in 22 of them. That's 18% of the entire Troughton era spent fighting Cybermen. The only Doctor to battle the same foe more often was Hartnell with the Daleks; he spent nearly a quarter of his episodes battling them.

Of course "The Tomb of the Cybermen" went missing for several decades between being junked by the BBC Archives and being rediscovered in Hong Kong. It's return provided a whole generation of Doctor Who fans - myself included - with the first proper exposure to the 'real' Troughton Doctor. Most Doctors change their performances as time goes on: Tom Baker's the obvious example, going from man of adventure to man of comedy to 'old and grumpy' over the course of his seven seasons. David Tennant goes from happy to anguished, Colin Baker from mean to friendly, Sylvester McCoy from comedic to threatening. Troughton went in the opposite direction to McCoy: in the Season 6 serials that I managed to see as a child, he was a slightly silly, flustered character, prone to comedy and childlike enthusiasm. The real Troughton is very different.

Here, in "The Tomb of the Cybermen", we finally got to experience the real Troughton Doctor. The one where the comedy and bluster is a mask, and beneath a very thin veneer of humour there is a very dark, ruthless and manipulative - okay, let's openly admit it - bastard working behind the scenes. The fact is that, had the Doctor not interfered, the human archaeologists would have never managed to revive the Cybermen. People die as a result, but the Doctor needs the Cybermen to be revived and their tomb unlocked if he is to destroy them. So off he goes, manipulating the humans step-by-step to do what he needs without getting his own hands dirty. Hartnell's Doctor would never have tolerated so much collateral damage.

This multi-layered approach to the Doctor's character would influence nearly every single subsequent Doctor on television, in particular Peter Davison, Sylvester McCoy and Matt Smith. This is the Doctor that I like: the one who may fight for justice across the universe, and may seem like a harmless, idealistic weirdo, but is actually one of the most dangerous and ruthless people you're ever likely to bump into. He's a lot more interesting that way.

Throughout the history of Doctor Who there are 'touchstone' episodes, ones that act as tentpoles to keep the whole circus running from one decade to the next. "The Tomb of the Cybermen" is one of the most critical ones. Here be monsters, as the old sea maps used to say, and on the map of Doctor Who the monsters begin right here.
Posted by Grant at 9:44 AM