Bodacious Space Pirates: "My Power, the Power of Pirates" 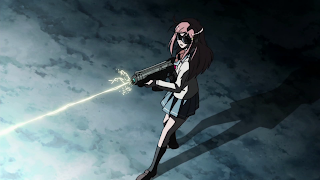 After her rescue from the cafe, Marika learns from Chiaki that the men watching her came from a number of organisations - police, military, organised crime - all trying to find out whether or not she would accept the captaincy of the Bentenmaru. She later trains in the use of guns with her mother, and then sets off on a voyage with the school's space yacht club. While preparing the ship for takeoff, Marika and Chiaki discover that someone is attempting to hack into the yacht's computer systems.

For a series that's supposed to be all about teenage space pirates, this episode features very little space and absolutely no piracy whatsoever. Instead we get a bit of bonding between Marika and Chiaki, and between Marika and her mother, and some fairly sedate scenes setting up to fly a space yacht. It's not bad bad, per se, but to be honest for a series titled Bodacious Space Pirates I was expecting something a little more exciting.
Two episodes in and this series is already striking me as a little odd. It's bizarrely sedate: the premise and the opening credits suggest a way-out, breakneck-speed zany comedy, and instead it's taking its time - arguably too much time - establishing characters and the setting. It isn't bad as such, just not what I feel was advertised.

The series continues to skirt the line in regards to fan service - that peculiarly anime phenomenon where female characters will inadvertently flash their underwear for the benefit of the primarily male 'otaku' audience. It's not enough to annoy, but it's certainly there.

I'm on the fence with this series: I'll certainly give the next episode a try, but the shine of the first instalment has not been maintained by the second. This leaves things at 50%.
Posted by Grant at 9:17 AM