Who50: "The Happiness Patrol" 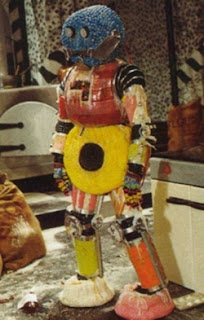 Who50 counts down to the 50th anniversary of Doctor Who by reviewing my favourite episodes and serials over the history of the programme, counting down from #50 to #1. Today, #31: "The Happiness Patrol", a 1988 three-part serial written by Graeme Curry and directed by Chris Clough.

The Doctor (Sylvester McCoy) and Ace (Sophie Aldred) travel to the human colony of Terra Alpha to investigate rumours of wrongdoings by its government. They find a world where being unhappy is punishable by death - a law enforced by the dreaded "Happiness Patrol".

This wasn't deliberate, I assure you. I worked out my fifty favourite Doctor Who stories last year, and worked out what order I liked them in, and here we are just days after the death of Margaret Thatcher and I'm writing about Doctor Who's own savage indictment of Britain's most loathsome 20th century leader.
Everything about "The Happiness Patrol" reeks of a pointed satire of Margaret Thatcher's Britain: an overly styled, overly well-spoken leader (Sheila Hancock as Helen A) who speaks of happiness and prosperity while her territory languishes in growing poverty beneath her, a superficially pleasant and happy state with an undercurrent of tyranny (let us remember that Thatcher supported apartheid in South Africa, condemned Nelson Mandela as a terrorist and claimed murderous dictator Augusto Pinochet among her better friends).

There's also a lot to suggest that the serial specifically challenges the Thatcher government's extraordinary attacks on the LGBT community during the 1980s, via the introduction of Section 28 of the Local Government Act 1986 - which essentially ordered local councils to avoid mentioning or supporting homosexuality, or indeed inferring by any means that such activity was okay. Cornell, Topping and Day make the best argument for "The Happiness Patrol"'s pro-gay agenda in their lauded book The Discontinuity Guide, but for now let us note the excessive use of pink, the obvious gay man being executed by the Kandyman (he even wears a pink triangle) and the fact that Helen A's husband abandons her for another man at the end of the story.

Oh yeah - the Kandyman. Has there been a more bizarre villain in Doctor Who history? He's not just named after candy, he's made of it: a homicidal robot literally coated in sugar, designed to look like a pile of liquorice allsorts, screaming and raving about new and ruthless methods of drowning execution victims in strawberry fondant. He's a little scary, but he's also tremendously funny.

Contrast that with the late night confrontation between the Doctor and two murderous snipers on a secluded balcony: Sylvester McCoy's Doctor has never been better than he is in this scene. He's also never been more threatening, in fact I'm not certain any Doctor has been this threatening.

I adore this story, because not only is it a skilled satire it's also a spectacular blend of traditional Doctor Who adventure and a curious inversion of it: the Doctor arrives, casually overthrows a government overnight, but deliberately leaves the population unhappy. The final shot of the story is somebody crying their eyes out. There's also that strange blend of the deadly serious and the perversely silly: this is such a difficult story to pin down, and there's so much packed into it's three episodes that it keeps giving the viewer more and more to enjoy with successive viewings.

(Apologies for the recent lack of posts on this blog: I have been away on holiday in Perth and Singapore.)
Posted by Grant at 9:53 AM