Doctor Who: "Journey to the Centre of the TARDIS" 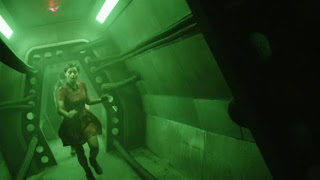 When the TARDIS gets caught in the grip of a deep space salvage trawler, it suffers tremendous damage - leaving the Doctor outside with a trio of salvage operators and Clara trapped inside within a labyrinth of tunnels, mysterious rooms and monsters. To save her life, the Doctor and his newfound companions must... journey to the centre of the TARDIS!

In a season largely dedicated to "blockbuster" episodes, styled as largely self-contained movies for television with an appropriately high concept, "Journey to the Centre of TARDIS" may just have the highest concept of the lot. The TARDIS has always been one of the most fascinating elements of the series, and there hasn't been a proper TARDIS-based episode since "Castrovalva" back in 1982. Notably, audiences haven't been able to see much of the TARDIS bar one or two corridors since the series returned in 2005, so an episode hunting around the heart of the machine makes for a wonderfully enticing premise.

I was a little concerned going into the episode that I was going to be disappointed. Writer Stephen Thompson was responsible for Season 6's "The Curse of the Black Spot", easily the worst episode of its year and potentially the worst episode of Matt Smith's entire run as the Doctor. It was a tremendous relief to discover "Journey to the Centre of the TARDIS" was its exact opposite: smart, funny, well-paced, a little bit scary, brimming with strange ideas and liberally soaked in continuity references for long-term fans. In short: fan crack.

There are some great ideas at work in this episode that manage to create something that's both engaging and clever. It's not quite the episode I was expecting to see, but I think it was actually better.

The TARDIS has been represented as a sentient, living machine for decades, but since Neil Gaiman's "The Doctor's Wife" I haven't been able to see it without immediately perceiving its emotions and foibles via Suranne Jones' performance in that episode. By attaching a human performance to a traditionally inanimate object, Gaiman has inadvertently been a godsend to this episode: whenever the Doctor talks about the TARDIS suffering or having 'a TARDIS tantrum', it's something that suddenly seems much more real and believable.

The episode's guest cast - Ashley Walters, Mark Oliver and Jahvel Hall - are uniformly great. They got a bit of attention around Doctor Who fandom for being the first all-black guest cast in the show's history. I feel slightly embarrassed not to have noticed: I just found them well-written and engagingly performed.

The season's story arc gets some nice development, along with new developments liked to Season 6's finale, "The Wedding of River Song". I was intrigued by the mention once again of the Medusa Cascade, a bit of detail from the Tennant era that I figured we'd never hear about again.  I was also very pleased with the episode's other numerous nods to the past - I'm torn as to what my favourite is, seeing the Eye of Harmony for the first time, or hearing all the lines from the TARDIS's history again.