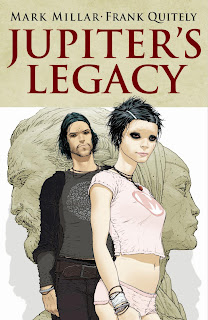 This was a really strong week for comic books in my opinion. I bought 10 books this week, and in reviewing them I've wound up awarding five stars to six of them. Maybe I'm being too generous with my scoring system, or maybe there's some really good stuff getting published at the moment.

I was originally going to pick up a digital copy of Mark Millar and Frank Quitely's new miniseries Jupiter's Legacy, but it turns out Millar has delayed the release of that title onto digital platforms in a bid to make more readers buy a physical copy. I have a major issue with this: a comic book is a comic book, and while I appreciate his intent to drive more people into brick-and-mortar comic book shops, it does seem quite like cutting off your nose to spite your face. He could have had a sale from me this week, but as my local comic shop didn't have any copies of his comic left on the shelf I guess I'll just give it a miss. If anyone did pick up a copy, let me know what you thought of it in the comments below.

This issue focuses on a stroke of absolute genius: it guest stars time-travelling superhero Booster Gold. One of the strengths of All-Star Western has been the way it has bounced off the DC Universe with references to and ancestors of familiar faces. We spent the first 19 issues or so in 19th century Gotham City, met great-great-great-grandfathers of Bruce Wayne and the Penguin, seen the early Court of Owls and most recently immortal villain Vandal Savage. Teaming Jonah Hex up with Booster Gold is a natural progression of that, and one that's a source of great comedy. This continues to be one of the hidden gems of the New 52 - I say that pretty much every month, because it's true. (5/5)

Issue #9 was all about mourning the death of Robin, and issue #10 is now all about the set-up for revenge. Every scene in this book is a set-up for the mother of all revenge climaxes in issues #11-13. Morrison makes such brilliant creative choices here, because in pretty much every case it's an idea that's blindingly obvious, yet has never been presented before. The highlight for me, however, is an imprisoned Ra's al Ghul taunting his daughter over her actions: she's about to lose, because she did the one thing that guarantees you will - she really pissed off the Batman. I don't think we've ever seen Batman this angry in more than 70 years of comics. (5/5)

What we basically have here is Die Hard as performed by the Flash. At the end of last issue the Flash mysteriously lost all of his powers (the reason in apparently in the pages of Dial H, which I haven't read), leaving Barry Allen to use his wits, skills and an armoury full of confiscated Rogues weapons to stop a violent jailbreak. This is a great inventive issue, giving us an opportunity to appreciate Barry Allen himself rather than simply his speedy superpowers. (4/5)

This is one of those issues where I'm simply full of superlatives: clever, inventive, funny, charming, sweet, beautiful, and so on. Immonen and Schiti tell what is essentially a bedtime story, only with a huge helping of knowing humour and wonderful characterisation. This is essentially self-contained as well, so if you're looking for one comic to pick up and read this is a pretty strong choice. It's also a must-read for fans who liked Marvel's Thor movie, since this issue features the Warriors Three, Thor and Sif among the cast. I read this one with a ridiculous grin from ear to ear. (5/5)

You have to worry about a comic when it has fill-in artists by its third monthly issue. I'm still on the fence with Katana: I like the concept of the character, but I'm finding the story Nocenti is telling to be awfully generic. It's not specifically bad, but neither is it particularly original or memorable. This really sticks out like a sore thumb in a week like this, when so many comics were good enough for me to award them five stars. This is competent stuff, but some weeks competent simply isn't enough. (3/5)

This is a near-perfect issue of Manhattan Projects, combining all the elements that have made the series so addictive: strong characters, out-there science fiction and a very dark, inappropriate sense of humour. It also manages to surprise me with at least one plot revelation. It's amazing to think back to the first issue and realise how far the comic has come in its first year. This is not the monthly comic book I was expecting when I started issue #1 - it's so much better than that. (5/5)

This is a solid, enjoyable issue, but my previous issues with this comic continue to weigh on the back of my mind: what is this book about? Why these characters? Why this setting? Where is it heading? I'm unconvinced there's sufficient meat on the bones to keep my sustained interest. I'm still liking the book, I just worry that I'm not liking it enough to justify the monthly purchase. I feel that I need a more cohesive storyline to start forming sooner rather than later: we're almost a year in and it still feels like things are just being introduced. (3/5)

While Ania Solo tries to work out what to do with the lightsaber she has recovered, it turns out that there are already powerful people hunting the saber down. I love the concept of Star Wars Legacy, since it takes place long enough after the original Star Wars films that the writers are largely free to do what they want. As a sad Star Wars nerd, it pleases me immensely every time an old element from the movies gets re-purposed: this issue sees Solo and her Mon Calamari sidekick get rescued by an IG-88 robot - and if you understood all that, then this is definitely a comic book for you. (3/5)

The current "Venom War" arc concludes with an absolutely gut-punch of an issue, soaked in depth and nuance and centred on one of the most spectacular bits of misdirection I've seen in a long time. The end result for Miles Morales is something I was anticipating, but the circumstances which lead to his decision absolutely were not, and they leave me torn between wanting to punch Bendis in the face for being so cruel to characters I love and wanting to high-five him for being so immensely good at what he does. Sadly this is Sara Pichelli's final issue as artist: she's been exceptional, and I can't wait to see what project she applies her talents to next. (5/5)

Every line of dialogue in this comic just pops off the page, whether it's Marvel Boy being awesome or Kid Loki being hilariously untrustworthy. Half of the effect comes from Gillen's writing, but the other half definitely comes from McKelvie and Norton's wonderfully expressive artwork. Once again there is also some experimental and progressive panel layout being used here: the diagrammatic rendition of Marvel Boy's first action sequence is a case in point. Marvel needs to be commended for the creative risks they're allowing their writers and artists to take in books like this and Hawkeye. (5/5)

Winner of the Week: It's a tough choice, but for raw impact it has to be Ultimate Comics Spider-Man.
Loser of the Week: No real losers, but Katana was definitely the weakest book I read this week.