Books of May: Underground, by Haruki Murakami (1997) 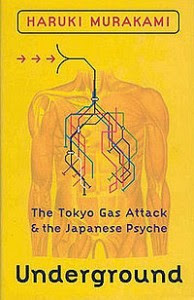 Books of May highlights books - both fiction and non-fiction - that have engaged, entertained or otherwise made a significant impact on me over the years. The goal is to highlight one book a day for the entire month. Today, book #1: Underground, by Japanese author Haruki Murakami.

The book I wanted to highlight today, however, is not actually one of his novels. It is Underground, a collection of interviews that Murakami undertook between 1997 and 1998 that focuses on the 1995 Tokyo subway gas attacks by the Aum Shinrikyo cult.

The attack, in brief: on 20 March 1995 members of the apocalyptic cult Aum Shinrikyo, under the instruction of cult leader Shoko Asahara, punctured bags of liquid sarin inside five Tokyo commuter trains. The liquid rapidly evaporated into a nerve gas which killed thirteen people, severely injured fifty and otherwise injured more than a thousand other people. It also understandably ground one of the world's busiest public transport systems to a standstill, and had a profound effect on the Japanese psyche.

Critical of the Japanese news media's sensationalistic coverage of the attacks, and curious to find out why such a horrific incident could occur, Haruki Murakami set about interviewing everyone he could find in relation to it. Underground is comprised of these interviews. It is divided into two sections. The first is with surviving victims of the attacks, and attempts to push past the media sideshow and discover exactly what happened from the victims' perspectives. The second section, incorporated into the book for its second edition (and the English translation), interviews past members of Aum Shinrikyo to find out why they joined the cult in the first place and how their experience of it - and the attacks - differed from how the media presented it.

Murakami is an excellent interviewer. He ensures in each case that we get to know each interviewee; we learn their names, their personal backgrounds, and their personality. He speaks to a broad range of victims: 34 in the English edition, more than 60 in the Japanese edition. As you read through the book, these separate accounts overlap. We see the same events from different corners of the same trains. One element of the book that has never left me is how many times subjects from one train recall an elderly transport worker finding the spilled bag of sarin on the floor and attempting to mop it up with some newspaper. This worker doesn't get an interview: he was one of the thirteen who died.

The section section (evocatively titled "The Place That Was Promised") is less horrific, but ultimately more heartbreaking. It's an incredible provocative and combative series of interviews, in which Murakami aggressively attempts to work out how a cult like Aum Shinrikyo could not only form but actively thrive for several years. It is a must-read for anyone wanting to their heads around how violent cults can develop and operate. What stunned me the first time I read this section was that the cult actively continued beyond 1995: it still operates today under the name Aleph.

I think the best books are the ones that haunt you, and this one has certainly haunted me now for more than a decade. It's a brilliant, intelligent, deeply profound work of journalism.
Posted by Grant at 9:55 AM

Email ThisBlogThis!Share to TwitterShare to FacebookShare to Pinterest
Labels: books, Books of May, Japan, reviews