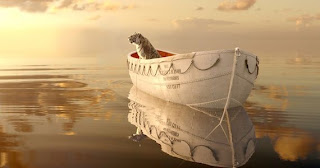 I have not read Life of Pi, the widely acclaimed and bestselling 2001 novel by Yann Martel. I have, however, now seen its feature film adaptation of the same name, released in late 2012 and directed by Taiwan's Ang Lee. It is a superlative achievement in filmmaking. It takes a novel broadly claimed to be unfilmable and not only successfully films it but does so with aplomb.

It is a deliberately ambiguous film too. Basically what you get from Life of Pi largely depends upon what you bring to it yourself, and I think that makes it a very special motion picture indeed. To explain why that is, I shall have to discuss the movie's ending - keep that it mind if you continue reading but have not seen the film or (I assume) read the book.

The bulk of the story is framed by an adult "Pi" (an Indian named Piscine Patel) relating the story of his survival at sea for 227 days in a life raft. He relates it to an anonymous writer, and ultimately provides two versions of the same story: one an extended and outlandish adventure with a Bengal tiger named Richard Parker, the other a shorter, more blunt version in which he is standed with other people. Now the writer has been promised a story that will make him believe in God. When asked which version of Pi's story he prefers, the writer chooses the more outlandish one because "it's a better story". "So it goes with God," says Pi.

On my viewing of the film I took this to be a surprisingly atheistic conclusion: we believe in God because it gives us a more uplifting and reassuring outlook on our world than the alternative can provide. Upon reflection, however, I realise that I read this ending because of my own personal bias: had I been a more religious or spiritual person I could quite easily have read the opposite: that because the writer is open to miracles and the unreal he can accept the existence of God while a more closed, inadequate mind could not.

This ambivalence is important, because it makes Life of Pi a brilliant exercise in open filmmaking: what has happened, and what has not? What is true and what is fiction? Such questions are up to the viewer to answer for him or herself, and there are no correct answers.

This is another masterful film from Ang Lee, a director who remains to my mind one of the world's best. He is a remarkably gifted filmmaker with a back catalogue of wildly varying genres and tones. He has directed superhero action (Hulk), period comedy-drama (Sense & Sensibility), suburban drama (The Ice Storm), a western (Ride with the Devil), romances both straight (The Wedding Banquet) and gay (Brokeback Mountain) and Chinese heroic fantasy (Crouching Tiger Hidden Dragon). Lee can flip from genre to genre with ease, a trait that's surprisingly rare in filmmaking and places him alongside other versatile talents such as Japan's Takashi Miike and Britain's Danny Boyle.

This film is deliberately cast with comparative unknowns: Suraj Sharma and Irrfan Khan as Pi, Rafe Spall as the writer and so on. The one exception is Gerard Depardieu in a small cameo as a ship's cook, and of course given the film's conclusion it is crucial that we notice and remember this character. Lee was smart to cast such an iconic performer in the role.

Life of Pi is beautiful, thought-provoking and challenging. I have heard that it also makes stunning use of 3D technology, however the version I watched was in 2D - always my preferred format.
Posted by Grant at 12:58 AM