Doctor Who: "The Rings of Akhaten" 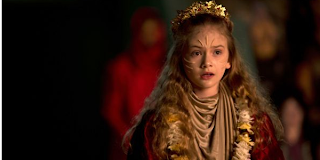 For her first trip inside the TARDIS the Doctor takes Clara to the Rings of Akhaten, where a once-in-a-thousand-years religious ceremony is about to go terribly, terribly wrong. Now it's up to the Doctor and Clara to save the day before an angry god wakes up and devours the entire system.

Just like "The Bells of St John" replicated "Rose" as a sort of light relaunch of the series, so "The Rings of Akhaten" replicates "The End of the World". For those who are straining to remember, "The End of the World" was a very clever second episode of Doctor Who's first season, in which Rose got to meet a whole pile of rubber-suited aliens at once. It was a deliberately 'out there' kind of an episode, which was the clever bit, since by slotting it in so early it made sure the audience knew that they could expect pretty much anything from the series to come.

So here we are with "The Rings of Akhaten", filled with even more strange rubber-suited monsters, a temple on an asteroid orbiting an angry sun, masked alien robot things, a weird semi-undead sort of mummy and rip-roaring chases on anti-gravity mopeds. In short, this episode is bonkers.
How much you enjoy this episode, then, is going to be dictated on how much you enjoy silly, bonkers episodes of Doctor Who. There's not a great deal in this that makes sense when you think about it, and the episode is resolved in the most sentimental 'clap your hands' fashion that Doctor Who has experienced since Russell T Davies left as showrunner. It is, in fact, the most RTD-esque episode that Steven Moffat has produced.

First of all, there's plenty to like here. Clara is becoming less irritating with each passing episode, which comes as a tremendous relief. Jemma-Louise Coleman does still deliver her lines too quickly, however, which sometimes leads to her sounding a little garbled. Her rapport with children, established in "The Snowmen" and "The Bells of St John", gets highlighted again here - I'm wondering if it's going to have some deeper significance in the plot. There's some lovely writing between the Doctor and Clara as well, properly articulating how the Doctor and his companion behave in a way that's obvious yet has never been as eloquently explained. Beautiful prologue scenes as well, it must be said. I'm rather enjoying this mystery surround Clara.

The alien marketplace is delightful, and wonderfully pitched. There's a nice contrast between the silliness of the market and the vaguely gothic, threatening feel inside the Akhaten temple. The 'grandfather' mummy is a wonderfully frightening creation, all decay and snarls, but it's a pity he really doesn't get too much to do. The same can be said for his masked, robotic servants.

Unfortunately the episode's actual villain is nowhere near as effective. It's basically a giant angry sun, the defeat of which left me wondering how long it would be before the people of the Akhaten system all froze to death without a star to orbit any more. There's also that vaguely rubbish 'save the day by telling stories' motif that fits right in with Season 5 as well as the RTD era, but still doesn't actually work. It didn't work in "The Last of the Time Lords" and it doesn't convince me here.

Despite a weak ending I did find myself enjoying the episode overall. It's the weakest tick of approval I've given for this season, but it squeaks through nonetheless. Doctor Who's 100% score remains in effect.
Posted by Grant at 8:53 AM