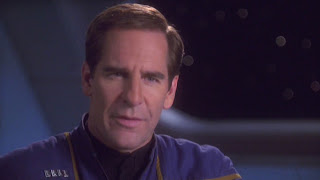 A small, inhospitable planet lies along the Vulcan/Andorian border. To the Andorians it is Weytahn, a colony that they settled on and started to terraform. To the Vulcans it is Paan Mokar, a valuable planet in a strategic location. After a tense period of truce, in which Vulcans have taken the planet and forcibly removed the Andorian colonists, a team of Andorian soldiers have stormed the old colony and taken several Vulcan officers hostage. The Andorian leader, Commander Shran, agrees to discuss a cease fire - but only if Captain Archer acts as negotiator.

Two of my favourite episodes in Season 1 of Enterprise were "The Andorian Incident" and "Shadows of P'Jem". Both episodes featured Andorian commander Shran (Jeffrey Coombs), and detailed continuing hostilities between the Vulcans and the neighbouring Andorians. It's great to see that this arc continues in Season 2 with "Cease Fire". It's not quite as good as those two episodes, but its still very entertaining and pushes both the Vulcan/Andorian and broader series arcs along quite well.

Guest starring alongside Commander Shran is Suzie Plakson as Andorian soldier Tarah. Plakson is better known to Star Trek audiences for playing K'ehlyr, the Klingon negotiator with whom Lieutenant Word had a son. She's very different here: cynical, edgy and aggressive. She provides a good amount of tension in the Andorian portions of the episode, as viewers wait to see how long it takes before she starts disobeying Shran's orders.

On the Vulcan side, Gary Graham returns as Ambassador Soval. I never warmed to the character in Season 1. Graham seemed to be playing him in a very stiff, wooden manner. He receives much better dialogue here, and a lot more to do, and this seems to have led him to loosen up a bit and give the character some depth. His growing - I hesitate to go as far as 'respect' - for Captain Archer is a nice development in terms of the long-term relationship between Starfleet and the Vulcans.

Once again this is an episode that paints Vulcans in a highly unflattering light, with references to forced relocation of Andorian colonists and possibly even some form of ethnic cleansing. This series really has it in for the pointy-eared logicians, and I'm still not sure I'm entirely comfortable with that.

Pleasant without being challenging, enjoyable without being original, "Cease Fire" is a simple hour of commercial entertainment. It was nice to see the Andorians back, but next time I hope they get to be in something a little more thought-provoking or provocative. Despite some promising signs early on, this one does fall back on a fairly tried-and-trusted plot.