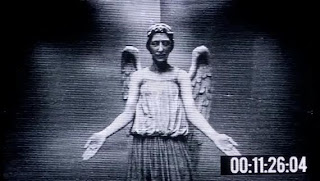 Who50 counts down to the 50th anniversary of Doctor Who by reviewing my favourite episodes and serials over the history of the programme, counting down from #50 to #1. Today, #28: "The Time of Angels" and "Flesh and Stone", a 2010 two-part serial written by Steven Moffat and directed by Adam Smith.

The Doctor and Amy are summoned by the Doctor's mysterious future friend River Song. Together they join a team of militarised clerics in exploring the remains of the crashed star cruiser Byzantium - and in hunting down the ship's deadly cargo. Things, however, are not what they seem, and by the time the Doctor works this out it may already be too late.

Steven Moffat's "Blink" was an outstanding episode of Doctor Who, introducing what is possibly the most effective and frightening monster in the series' long history: the Weeping Angel. They move when you don't look at them, even while you're blinking. (Hence the title.) So perfectly written was this episode, and so neatly constructed, that a follow-up seemed like a really bad idea. In typical (and admirable) form, Moffat wrote a sequel anyway.

The template is obvious, and a stroke of genius. Doctor Who has always been a series based in pastiche: take a pre-existing work of fiction, play around with it, and re-present as-new with extra time travellers, Daleks, or what-have-you. It is a formula that has enabled Doctor Who to adapt Frankenstein ("The Brain of Morbius"), Dracula ("State of Decay"), The Prisoner of Zenda ("The Androids of Tara") and even King Kong ("Robot"). As script writer Ben Aaronovitch ("Remembrance of the Daleks") once wrote (and I'm paraphrasing a bit here): 'Talent borrows. Genius steals. Doctor Who writers get it off the back of a truck, no questions asked."

For a sequel to "Blink", Moffat went straight to another sequel to a brilliant bit of sci-fi horror: James Cameron's Aliens. This 1986 sequel followed on from Ridley Scott's Alien by switching genres and upping the ante. Instead of a straight horror film, it was a military action-adventure. Instead of one alien to run away from, it brought hundreds. By the same token, "The Time of Angels" and "Flesh and Stone" take the small-scale menace of "Blink" and amplify it by many times.

Of course being a Doctor Who story there are a lot of unexpected and inventive wrinkles. The marines aren't simply gung-ho soldiers - they're religious clerics. The Angels don't just use the same time-displacement tricks they used in "Blink": they're now murderous, violent animals, more prone to snapping the neck of a soldier than sending them back into history.

They even get fresher and more terrifying powers. Blink and the monster will get you; don't blink and the monster will get inside your head and transform you into one. Plus it's not just an angel itself that's deadly: the image of an angel becomes in itself an angel. This is executed in a brilliant sequence where Amy finds herself trapped in a room with a video image of a Weeping Angel; if the story as a whole echoes Aliens, this sequence clearly references Hideo Nakata's Ring.

The episodes have a strong guest cast, notably Iain Glen (Game of Thrones) as the deadpan Father Octavian and Alex Kingston as River Song. When she had previously appeared (in "Silence in the Library") it felt like (and I suspect actually was) a one-off role. Here Moffat brings the character back in order to trail a mystery through the next two seasons of the series. Opinions on the character seem to be divided among Doctor Who fans. Personally I think bringing her back in this fashion was a stroke of genius.