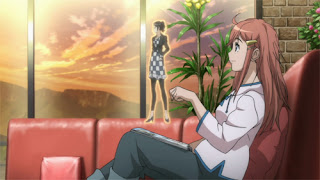 It seems like there's an art to naming anime. Obviously it is in part an artifact of translating a logographic and syllabic written language into an alphabetic one, but there's a strong element of cultural difference. Here in the English-speaking world we have science fiction shows like Doctor Who and Star Trek. In Japan typical titles include Neon Genesis Evangelion, Genesis Climber Mospeada and All-Purpose Cultural Catgirl Nuku Nuku. That in mind, while I feel I should be somewhat self-conscious watching an animated science fiction TV series titled Bodacious Space Pirates, as it's a Japanese series it's probably just par for the course.

Teenage girl Mariko Kato goes to high school and works part-time as a waitress in a local cafe. One day she discovers not only that her father - that she didn't know - has died, but that as his heir she has inherited his pirate spaceship, crew and letter of marque.

It's a ridiculous premise to what feels like a pleasingly ridiculous show. Anime has a rich history of blending science fiction and comedy with the odd dramatic underpinning, and it does look like Bodacious Space Pirates has the potential to join that list. The series it most reminded me of was Martian Successor Nadesico, and I wasn't surprised to learn after the fact that the two series share the same director: Tatsuo Sato. Production company Satelight also produced AKB0048, which I've started reviewing on this blog: you can see similarities between that show and Pirates as well.

The animation is very strong, blending cel art and CGI more effectively than a lot of series do. The design work is fairly generic but broadly appealing. I was pleased to see that, for this episode at least, while a lot of characters wore short skirts I don't recall seeing any of their underwear.

This first episode hasn't completely grabbed my attention, but it's entertaining enough to continue watching and I certainly recommend it if this sort of light-hearted anime is your thing. It's also pleasing to see it's come out via new Australian distributor Hanabee. The production and design values of the blu-ray are great, and when it comes to releasing anime for Australian audiences I say the more the merrier.
Posted by Grant at 7:46 AM