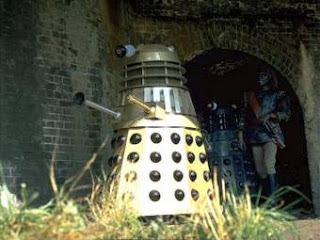 Who50 counts down to the 50th anniversary of Doctor Who by reviewing my favourite episodes and serials over the history of the programme, counting down from #50 to #1. Today, #30: "Day of the Daleks", a 1972 four-part serial written by Louis Marks and directed by Paul Bernard.

I generally dislike Jon Pertwee's tenure as the Doctor. It's not Pertwee himself, although to be honest I could give or take his version of the character. It's more the actual series surrounding him at the time: the idea of television's ultimate freewheeling rebel would settle down and work for the military strikes me as deeply counter to everything the series demonstrated before or since. That aside, the UNIT set-up does work sufficiently for one year (Season 7) before the arrival of Jo Grant, Mike Yates and the vaguely ridiculous and cozy "UNIT family". After that it's just four years of what seem like interminably long, vaguely tedious serials where - more often than not - the Master pops up like a Scooby Doo level antagonist.

This in mind, I'm somewhat surprised that - once I've gone through all the Doctor Who serials ever made and picked out the 50 I like the most - Pertwee stories keep cropping up on this list. "Day of the Daleks" is the 21st story I've written about, and the fifth to star Jon Pertwee. I've only blogged about Tom Baker stories three times. Sylvester McCoy, still my sentimental favourite among the 11 Doctors, has only come up once. If nothing else, assembling this list is making me re-evaluate my opinions on the Jon Pertwee era. I still don't think the majority of his stories are very good, but when they are they really do shine.
"Day of the Daleks" hinges on an oft-used time travel story trope, albeit one not previously used in Doctor Who: a group of rebels, fighting the Daleks in Earth's future, travel back in time to prevent the invasion from ever occurring - not realising that it is their interference that causes the invasion in the first place. It's a storyline that done exceptionally well: complex enough to engage, but told in a simple enough manner that kids watching can easily understand it. It's also a very well paced serial, rattling along quite amiably across four episodes without any obvious padding or dragging around.

This serial is the first of two to feature the Ogrons, gorilla-like shock troopers for the Daleks. It's an interesting angle, but possibly not one that really fits with the xenophobic nature of the Dalek race. They're a nice addition to Doctor Who's pantheon of aliens, however, and it's a shame that after the following season's "Frontier in Space" they're not used in the series again.

This must have been a sensational season opener back in 1972: the first appearance of the Daleks in five years, and their first appearance in colour (not counting the Peter Cushing movies, of course). From here they appear annually for the next three seasons, in "Frontier in Space", "Planet of the Daleks", "Death to the Daleks" and finally in the phenomenal "Genesis of the Daleks". Had producer Barry Letts not insisted on bringing them back here, it's possible we may never have seen them again.
Posted by Grant at 10:56 PM