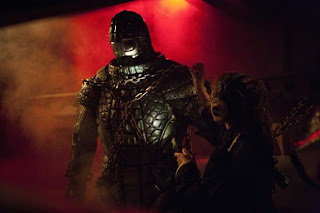 The TARDIS arrives on a Russian submarine in the early 1980s, where a drilling expedition has uncovered a mysterious figure frozen in the ice. When the figure defrosts, it turns out to be a long-dormant survivor of the planet Mars - a fearsome Ice Warrior that may just bring about the end of the human race.

I was tremendously excited about "Cold War", as it sees the return to the screens of the Ice Warriors after a near-40 year absence from the screen. The Ice Warriors were created by Brian Hayles, who wrote them into four of his Doctor Who serials: "The Ice Warriors", "The Seeds of Death", "The Curse of Peladon" and "The Monster of Peladon". They're one of the greatest inventions in Doctor Who history. They developed and grew as the series progressed: sometimes villains, sometimes allies, and with a remarkable degree of complexity for what were essentially rubber-suit monsters.

Writer Mark Gatiss is an enormous fan of Doctor Who, and will have absolutely seen Hayles' Ice Warrior serials many times. What a pity, then, that he wrote such a lacklustre and derivative script.

"Cold War" is, for the first act at least, a fairly substandard remake of Robert Shearman's 2005 episode "Dalek". Once again we have an old Doctor Who monster, seemingly the last of its kind, chained to a wall having a conversation with the Doctor. "Dalek" was a brilliant episode, and really made a lot of us sit up and take notice eight years ago. It's a real shame that Shearman, now an internationally award-winning author, never wrote for the TV series again - and instead we get stuff like this. I don't know what it is about Gatiss: whether it's this, "The Idiot's Lantern", "The Unquiet Dead" or "Victory of the Daleks", he simply doesn't seem capable of writing a script I like. His best effort, 2011's "Night Terrors", was still pretty mediocre.

In visual terms, the new Ice Warrior costume is a masterpiece: it's heavily influenced by the original 1960s design, only with a much finer and more impressive detail to it. As far as looks go, I think it's the best translation of an old monster to the new series that they've done. Then the Ice Warrior climbs out of his suit.

This is something the old series never did. In fact, they make a plot point out of it. The episode shifts at this point from a poor remake of "Dalek" into an obvious rehash of Ridley Scott's Alien, as a rapidly diminishing crew run around the sub trying to find the murderous alien creature who's killing them off. This might have been vaguely passable had they kept the naked Ice Warrior in the shadows. Instead we're blessed with a bizarre series of close-ups whenever it speaks with a computer-generated visual effect that's possibly the worst-looking thing in Doctor Who since the BBC brought it back.

I really wanted to like this episode. Matt Smith's on form, and Jenna-Louise Coleman is settling down with each passing episode. It's even got great, talented guest stars like David Warner and Liam Cunningham. Sadly it just didn't convince me. Worst of all, it actually bored me.

What has been a winning streak for Doctor Who has finally broken. Eight good episodes and one stinker: the season now stands at 89%.
Posted by Grant at 7:39 AM