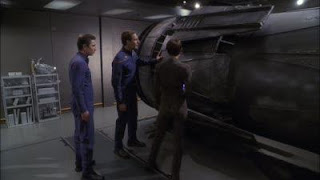 When the Enterprise comes across a derelict human space capsule, Archer is convinced he has found the body of legendary warp drive inventor Zephram Cochrane. Instead he and his crew have stumbled upon a starship from the far future - and it isn't long before the Suliban arrive to claim it.

That time travelling story arc rears its head again. I'm not sure what to make of it at this stage. It goes in fits and starts, usually interesting while it's playing out but too conveniently dropped and forgotten. This particular episode has some great ideas, and a wonderful sense of rising tension, but at the same time it feels annoyingly incomplete. If they were guaranteed to follow up on events in a few weeks I wouldn't mind, but I've a gut feeling it will be the season finale at least before we see more of this plot thread in action.

I think the episode does have a few problems. For one thing, the Suliban are becoming a little tedious. Here they turn up without explanation, and get generally threatening without really doing much. Back in the season premiere they were as good as unbeatable. It's taken a season and a half from them to go from strange and creepy threat to being just another set of alien antagonists.

The episode also features the Tholians, of Star Trek's "The Tholian Web" fame, but it's a brief appearance that pretty much allows them to wave, say "hey fans, remember us?", and leave.

Other aspects of the episode are more successful. Trip and Reed get to explore a vastly superior starship to their own, in a series of scenes shot and acted with an appropriate level of awe. T'Pol and Archer get to continue their debate over whether or not time travel is even possible, and T'Pol certainly seems to exit this episode with her eyes open.

The potential of "Future Tense" is certainly bigger than its execution. While it could be so much better, it is still a fairly entertaining hour. I'm entertained, yet disappointed. Ten worthwhile episodes out of 16, that's a season score of 63%.
Posted by Grant at 9:58 PM