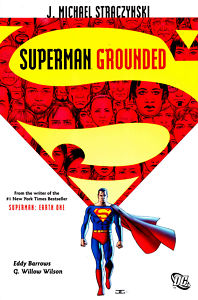 After the destruction of New Krypton, and a general sense of public mistrust towards him, Superman decides to reconnect with the people of the USA by abandoning his powers of flight and walking from town to town across America. On the way he gets to help people in small ways, and learn that life doesn't have to be about massive superheroic battles all the time.

"Grounded" was a storyline created by J. Michael Straczynski (Babylon 5) and launched in 2010's Superman #700. It's terrible. I was originally going to ease into slamming the book but I figured why cushion the blow? This is a terrible Superman comic: terrible in concept and terrible in execution. The art's great, but a nice drawing of a turd is still a picture of some poop.

Straczynski was so disinterested in his own story that he never actually finished it. He left that up to replacement writer Chris Roberson (now doing great stuff with Monkeybrain Comics) while he went off to write his Superman: Earth One graphic novels (also terrible). If JMS can't be bothered finishing a comic book storyline, why should we?

First and foremost, this book is flawed at the conceptual level. Straczynski asks the question: 'what's the purpose of having all of Superman's powers if you can't help ordinary people?' The problem is that it's a question that, once answered, shatters the concept of Superman altogether. If Superman gets a cat out of a tree, why not rescue a child from drowning in their swimming pool? If he does that, why not use his super hearing and stop all the spousal abuse in a town? Why just a town, why not a whole city? Or the whole USA? Or the whole world? Why not cure cancer, bring the forest back to the Sahara, end world hunger, defeat all dictators- basically once you take Superman away from fighting giant robots or stopping alien invasions, the entire concept of the character is prone to collapse.

Instead Straczynski has Superman go walking, fighting little crimes in small town America. He sets fire to some houses, bullies a journalist, harasses some illegal immigrants - which seems deeply hypocritical to me - and saves a kid from an abusive father. The attempt to handle social issues is ham-fisted and outdated. Superman is written in an entirely arrogant and unlikeable manner.

There's one Lois Lane-centric issue in the middle that actually isn't too bad. Turns out it was by a different writer: the considerably more talented G. Willow Wilson (Air).

This comic is dreadful.
Posted by Grant at 8:58 PM