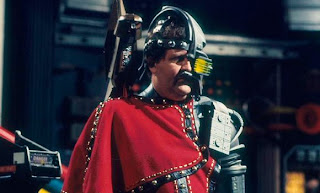 Who50 counts down to the 50th anniversary of Doctor Who by reviewing my favourite episodes and serials over the history of the programme, counting down from #50 to #1. Today, #29: "The Pirate Planet", a 1978 four-part serial written by Douglas Adams and directed by Pennant Roberts.

The Doctor (Tom Baker) and Romana (Mary Tamm) continue their quest for the mysterious Key to Time. Seeking the second segment, they set course for the planet Calufrax - only to discover that Calufrax appears to be missing, and the mysterious planet Zanak now sits in its place.

Finding a balance between science fiction and drama can often be a tricky prospect, and in the case of Douglas Adams it seemed trickier than most: he was script editor of the series for Season 17 and drove the series headlong into comedy without really leaving much room for any proper drama. Serials such as "City of Death" (which he co-wrote), "The Creature from the Pit" and "The Horns of Nimon" are all entertaining Doctor Who adventures - at least for me they are - but they don't do a very good job of telling a great science fiction story at the same time.

A year earlier, however, Adams wrote "The Pirate Planet". This was his first Doctor Who commission, and as far as I'm aware his first solo gig as a television script writer. It has the enthusiasm of a writer out to prove himself, and by his unexpected promotion the following season it seems that he certainly managed that.


There are a few specific things I wanted to mention about this story, so let's just get the bulk of it out of the way first: "The Pirate Planet" is a great, weird little Doctor Who adventure. Its central concept is a clever one. A hollowed-out planet teleports across the galaxy, enveloping smaller worlds and then harvesting them for minerals. At the same time, Adams injects an unexpected (for the time) amount of silly comedy by making the captain of this "pirate planet" an actual pirate, complete with a robotic parrot. There's a cult of telekinetic psychics, some light romance among the supporting cast, and a well-structured four-part narrative that rattles along at a brisk pace.

Then in the middle of the final instalment, there's this unexpectedly serious scene in which the Pirate Captain (Bruce Purchase) shows off his collection of miniaturised planets. They're all shrunk down by phenomenally powerful gravitational forces, so that the Captain can gloat over a room filled with actual honest-to-god planets. And the Doctor completely loses it.

We've seen the Doctor angry before and we'll see him get angry afterwards, but there is something incredibly striking about the way Tom Baker suddenly blurts out 'but what's it for?!' with an exasperation and disgust that the character has simply never expressed before. The Doctor's faced many pointless megalomaniacs, but never before has he been so angry as to be genuinely flummoxed at how completely unnecessary their villainy is. Taking over the universe he can understand. Miniaturising worlds so that you can gloat over them in your special planet-gloating room is simply inexplicable to him. It's absolutely one of my favourite scenes in the entire history of Doctor Who.

As this is the only story from Season 16 to make my top 50 I also wanted to take the opportunity to praise Mary Tamm's Romana. Fans generally focus on Lalla Ward's performance as the character, which is understandable: she's brighter, more like the Doctor and - I suspect most importantly - she hung around for twice as long. Tamm's version of the character is deeply underrated. She's ridiculously smart but hopelessly naive, and she has a wonderfully dry sense of humour. I'm so happy that Tamm revisited the character for a season of audio dramas before she died.

This is one of those Doctor Who stories that seems to be constantly overlooked by fans. This is a shame, because I honestly think it's one of the best Tom Baker serials they produced.
Posted by Grant at 7:48 AM