Doctor Who: "The Bells of St John" 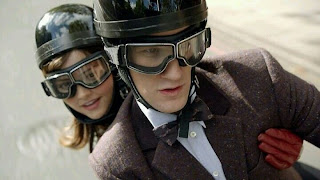 There's something living in the wireless networks of planet Earth. It's kidnapping people's minds and capturing them in the data cloud. Now it has London nanny Clara Oswald in its sights - and the one person who can save her has already seen her die twice...

"The Bells of St John" is, despite coming halfway through Season 7, a season premiere for all intents and purposes. Before budget cuts and scheduling decisions started playing merry hell with Doctor Who's timetable, we always used to get a new season for Easter. As a result, this episode - the first for 2013 - feels like more of a starting point than "Asylum of the Daleks" did. It properly introduces a new companion - just like "Rose", "Smith and Jones", "Partners in Crime" and "The Eleventh Hour" did. Like those stories it is set in present-day England. And like those stories it successfully introduces a new companion, kickstarts the series anew but fails to fully develop as a story in its own right.

It's a fault of the format, and one that I've been seeing ever since the series returned in 2005. The average television drama - even the average science fiction one - can tell a self-contained, satisfying story within a commercial hour (40-50 minutes, depending on country and network). This is because the regular characters don't change and, generally speaking, the setting doesn't change. Doctor Who, on the other hand, changes setting and cast pretty much every week, and the time spent necessarily introducing them eats into time other shows have for plot and depth of character. Since 2005 Who has fairly emphatically emphasised depth of character, so this leaves precious little time for plot. Thankfully, "The Bells of St John" does one thing that the other episodes I cited mostly didn't: it leaves itself very wide open as an obvious lead-in to a follow-up episode somewhere down the track (I'm guessing the season finale).

There is some wonderfully creepy stuff going on here, including a brilliant cold open ("I don't know where I am") and an absolutely chilling denouement for Miss Kizlet (guest star Celia Imrie). There's also a very clever sequence in the middle with a crashing airliner. So for the most part this is a good episode.

Then there's our new companion, present-day Clara Oswald. In "Asylum of the Daleks" she was deeply irritating. In "The Snowmen" she was moderately irritating. Here she's only mildly annoying, but I can't pretend the annoyance isn't there. Jenna Louise-Coleman delivers her lines in such a rushed fashion that I occasionally couldn't understand what she'd said. Then there are the repeated "down boy" lines of suggestive sexuality and snogging. It's feeling trite and forced, and weakening the character. So far Clara is far from the worst companion Doctor Who has had, but for me she's fairly far from being the best.

Other new stuff: Matt Smith gets a new coat, which I like; the new credits and opening theme are warming on me; the ultimate villain of the episode impressed me a great deal. This season continues to entertain: it's not necessarily reaching the heights of the series, but it's been a consistently amiable and enjoyable ride.
Posted by Grant at 5:14 PM