The Omega Factor: "The Undiscovered Country" 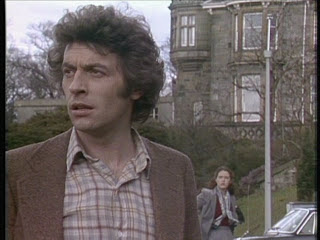 Journalist Tom Crane arrives in Edinburgh to continue his series of investigative articles into the occult. Instead of an entertaining lead, he instead discovers murder, secret government experiments, a mysterious psychic named Drexel and the startling possibility that Tom may have powers of his own.

I've long thought of The Omega Factor as the black sheep of BBC telefantasy. It was produced in the 1970s, a decade where dramas like Doctor Who, Blake's 7 and Survivors became cult hits, and yet it only got aired on TV once, was never released onto VHS and - despite a DVD release some years ago - remains a curiously unseen and underappreciated gem. This is a deep shame, as the series basically managed to be the BBC's answer to The X Files, made 15 years earlier and with a focus not on UFOs but rather on telepathy, psychokenesis and other mind powers. It was a controversial series on release, and remains pretty much the sole casualty of Mary Whitehouse and the National Viewers and Listeners Association's campaign against violence on the BBC.
This episode has a nicely slow, domestic pace to it. It takes its time, and isn't bound by an ambition larger than its limited budget. The Omega Factor was a BBC Scotland production, leaving it with an episode-by-episode budget even lower than its SF contemporaries. Thankfully this is a series focused more on character drama and dialogue than action scenes or visual effects.

It's gifted with a great cast as well. James Hazeldine (later to star in Londons Burning) plays Crane with a combintion of drive and incredulity. He looks and acts quite a lot like Gareth Thomas (Blake's 7) - so much so that I've met more than one person who'd misremembered Thomas himself playing the role. Louise Jameson plays Anne Reynolds, Tom's friend and confidante in Edinburgh. This was the first role Jameson played after leaving the role of Leela in Doctor Who, and she's very different here: sophisticated, calm and articulate. James Carlyle rounds off the lead cast as Dr Roy Martindale, who comes to supervise Tom and Anne via the elusive Department 7. Cyril Luckham plays Drexel, a retired occultist and reputed psychic. Tom tracks him down to get an interview. Instead he finds a potent enemy Luckham gives a great performance, in turns both humble and then absolutely chilling.

The direction is occasionally a bit static and theatrical, but then BBC drama from this period generally was. Put in its historical context it's one of the best bits of telefantasy the BBC ever produced.
Posted by Grant at 2:06 AM