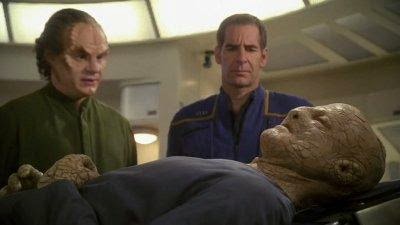 Oh I was so hopeful for Enterprise after the last episode ("Stratagem"), in which they finally seemed to get some narrative drive back. I should have known better: 'Harbinger" balances three storylines, one of which could have been great if written more effectively and the other two basically achieve nothing bar sabotage the first by leaching away its screen time. The end result is a chore to sit through; my eyes rolled with such frequency they could have been hooked up to a generator and powered half a suburb.

En route to the Xindi superweapon, the Enterprise encounters a dangerous pink area of space where several spatial anomalies have aligned. Inside they find a dying alien inside an escape pod, only rather than thank the crew for rescuing him he demands to be returned back where he was. Meanwhile Lt Reed and Major Hayes literally come to blows over how best to train the crew, and T'Pol gets jealous over the fact that Trip is spending time with another female officer.

So let's take them one by one. Firstly, Reed versus Hayes. This is a storyline in which two presumably professional military officers get into a violent pissing match over who's going to train members of the crew in hand-to-hand combat. It starts off simply tedious and stereotypical and ends in a brutal martial arts showdown in a corridor that should have had both men arrested and demoted instead of just shouted at by their captain.

Major Hayes is an odd character: he was introduced because the Season 3 arc apparently required trained shock troops, only he's barely been seen for the whole storyline. This is the 15th episode of the season and he's turned up a total of three times. Basically he's in the series just prominently enough to make it weird when he's not there.

T'Pol's jealousy towards Trip and MACO officer Amanda Cole (Noa Tishby) is another cliche-ridden plot thread, one which weakens her as a character to push the T'Pol/Trip romance forward. Both Connor Trinneer and Jolene Blalock do the best with what they're given, and certainly their 'morning after' conversation in the mess hall features superb comic timing, but both characters deserve better than what they're given here. It's a weird romance that's never really been given the writing to earn it. For the bulk of this particular episode it's flat-out embarrassing. It also features, by-the-by, some unexpected and fairly unnecessary nudity. I'm pretty sure it's the first naked bottom seen in Star Trek since Picard was being tortured in "Chain of Command", and of course it's T'Pol's.

Then there's the case of the mysterious dying alien, which gets limited screen time, feels like filler as a result, and then twists at the last minute to make it massively significant to the season's story arc. It feels badly mishandled, mostly due to a truncated running time. It also muddies the waters just when it felt like we were back on track again.