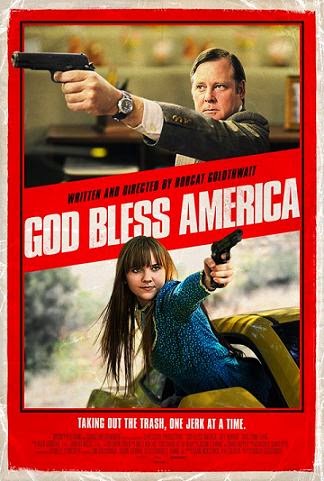 To a certain generation of movieogers, Bobcat Goldthwait is always going to be Zed the squeaky-voiced gang lord turned police officer in Warner Bros' dreadful Police Academy movies. He's been flying under the radar in recent years, however, as a writer and director of some exceptionally black comedies. His 2006 and 2009 films Sleeping Dogs Lie and World's Greatest Dad both had their fans, but he really got some sensational notices for his 2011 satire God Bless America. And rightfully so: it's razor-sharp and brutally violent, but most importantly it's a smart movie comedy that actually has something to say.

Middle-aged insurance salesman Frank Murdoch is divorced with a brat daughter who hates him and neighbours who won't give him enough quiet to cope with his constant migraine headaches. When he is diagnosed with a brain tumour and fired from his job, Frank goes on a violent killing spree - egged on by teenager Roxy Harmon - to kill everyone who are collectively dragging American culture into the gutter.

Joel Murray's central performance as Frank drives the movie. He's a sad, pathetic man, and obviously his violent actions are reprehensible, but his opinions on American culture are spot-on and honest. America has become a pretty ugly culture. I'm not in agreement that we should start murdering the stars of reality TV shows, but in terms of observing the failings of popular culture this century Frank (and, by extension, Goldthwait) is spot-on. America seems to be a very mean place, and Frank's comparisons of it with the Roman Empire seem eerily accurate.

Tara Lynne Barr is great as Roxy Harmon, playing up the perkiness and excitement of the character in a way that just makes her bloodthirsty drive to shoot people even funnier. It's the sort of role that generally goes to Ellen Page, and it's great that Barr manages to make it something very distinctive. Speaking of Page, the dynamic between Barr and Murray does remind me a lot of James Gunn's excellent vigilante black comedy Super, which starred Page along with Rainn Wilson. I suspect anyone who enjoyed Super will enjoy the hell out of God Bless America.

This is a very violent, occasionally confrontational, and bleak comedy. It's also brilliantly written and very well performed. Fans of this kind of comedy would be advised to check it out (although, to be fair, you probably have already).
Posted by Grant at 10:50 AM