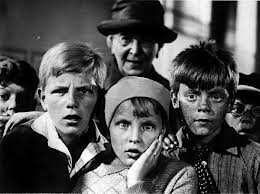 Here's an odd change of pace: I've been watching a lot of independent American horror movies of late, so it was quite a break to watch a 1931 German childrens film instead. A German boy named Emil Tischbein gets onto a train for Berlin with 140 marks in his pocket to give to his aunt. By the time he arrives, the 140 marks in missing - stolen by a creepy man in a bowler hat - and Emil must team up with a gang of Berliner child detectives to recover the money. It's all wonderfully cheerful fun, based on the 1929 novel by Erich Kästner. This is the first adaptation of the novel, but there have been at least five others since, including a 1935 English remake and a Walt Disney version in 1964.

Of the six films, this is the one with the greatest cultural cache. Its screenplay was written by Billy Wilder, later to become arguably the greatest-ever writer and director of American film comedy. That screenplay was then rewritten by Emeric Pressburger, who would subsequently move to England and write and produce a string of legendary films including The Red Shoes, A Matter of Life and Death and Black Narcissus. It even received uncredited assistance from Fritz Lang (M, Metropolis, et al).

Of course looking into what the makers of Emil and the Detectives did next is a fairly depressing exercise. Within a decade its author had been banned from German bookstores, its Jewish screenwriters had fled the country, and much of the talented cast of youngsters had been killed in action in World War II.

The film itself is a tightly plotted and highly enjoyable caper. It only runs to 69 minutes, and proceeds at a brisk pace. The children act like children, albeit highly resourceful ones, and Emil's attempts to recover his money play out in a remarkably suspenseful fashion. Given the sharpness of the plot and the humour, it's not surprise that Wilder and Pressburger worked on the film; their fingerprints are all over it.

One early sequence sees the thief drug Emil with a poisoned candy in order to steal his money. The subsequent hallucination is a bold and innovative sequence of trick camera shots and visual effects that's very effective today, let alone 80 years ago.

Fritz Rasp is excellent as Grundeis, the thief who steals Emil's money. He plays the part with just the right balance of scabby realism and over-the-top villainy. Other adult roles are nowhere near as developed; this is absolutely a film about children starring children. It's a great one, too. If you have kids up to reading subtitles (or understanding German), I can imagine they'd still get a lot of enjoyment out of the movie today.
Posted by Grant at 9:25 AM