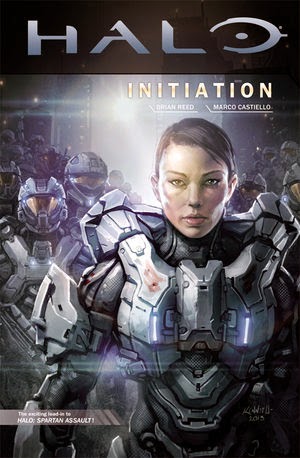 I've been reading quite a few graphic novels lately, generally borrowed from my local library, so I thought it might be worth having a quick look over them and see what they were like.

At the end of 2014 Dark Horse lose their lucrative Star Wars license, and that leaves a massive hole in the company's publishing schedule - not to mention a massive void in the middle of their revenue going forward. One thing they seem to be playing with as a possible replacement is a string of videogame licenses. They're already having quite a lot of success with Mass Effect, and with Halo: Initiation they've started up adapting the popular Xbox franchise as well. It's slightly odd that they've got the Halo license, since it used to belong to Marvel - who now have the Star Wars license. Swings and roundabouts, I guess.

This is a very nicely packaged book, collecting a four-issue miniseries (or it might be the first story arc of an ongoing - I'm not sure) into a slick hardcover volume. It tells a pretty solid action-adventure tale as well, setting up the lead characters for what I assume will be further adventures. Marco Castiello's artwork is excellent, and really boosts the script. Obviously you're going to get more out of this book if you're familiar with the Halo videogames, but I don't think that's necessary. It's an enjoyable slice of military SF regardless. (3/5)

Under the cut: reviews of Iron Man: The Secret Origin of Tony Stark, Iron: Or, the Water After, and Savage Wolverine: Kill Island.

Iron Man: The Secret Origin of Tony Stark, Book I

I wasn't sure what I was expecting from this book, the second volume in the most recent relaunch of Iron Man. I'm pretty sure I wasn't expecting a team-up in space between Tony Stark and Death's Head, an old Marvel UK robot bounty hunter. This is really an odd book: it's also a mostly great book, but it does take a little while to get your head around it. It's also the first half of a story, which makes for mildly frustrating reading.

Iron: Or, the Water After

This is a beautifully packaged graphic novel. If nothing else, Archaia have made a work of art just with the cover, hardcover format and layout of this book. Sadly it's packaging a pretty underwhelming story. It's a paranoid post-war story of rebels and secret documents, but played out with anthropomorphic animals: rabbits, birds and so on, all wearing mid-20th century fashions.

When a writer/artist like Art Spiegelman created a graphic novel like Maus, he used anthropomorphic animals to build on the themes of his story: Jews as mice, Nazis as cats, and so on. Sadly in Iron there's no discernable reason for the story to feature animals: it simply does, as if Vidaurri liked the aesthetic and simply went with it. This is a pretty book, but an ordinary one too. (2/5)

Frank Cho draws a sensational looking book here, right up to the point where Shanna the She-Devil turns up, her enormous breasts heaving unrealistically from beneath her micro-bikini, her tattered loincloth always just covered her most private parts. It turns what is otherwise a very funny superhero adventure into a sleazy thing. It's the sort of comic book that should come in its own brown paper bag, read in secret, oozing with shame and regret.

It's a pity because the Hulk turns up halfway through, and he's always great value, plus Hulk co-star Amadeus Cho makes a welcome appearance as well. Wolverine himself is wonderfully crabby and constantly getting horribly injured. It's just that pornographic edge that ruins everything - that, and the fact that this book has no ending. I could forgive that with the Iron Man book because it says it's Book 1 on the cover. Kill Island doesn't do that. (2/5)
Posted by Grant at 11:15 PM