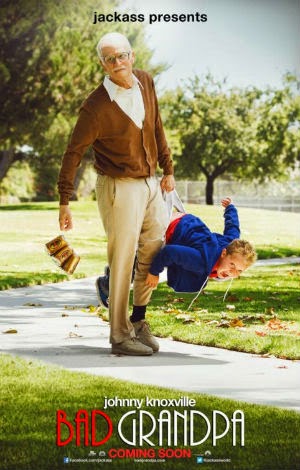 Jackass, which started as a stunt/prank comedy TV series before graduating to three highly successful motion pictures, is one of those franchises with an ardent, enthused fanbase and a surrounding chorus of naysayers - naysayers that, generally speaking, have never actually seen an episode or one of the films, but feels qualified to condemn it as tasteless, untalented trash anyway. It's kind of like Twilight in that respect; if everyone who says Twilight is a terrible film had actually seen the film, it would be the highest-grossing movie ever made.

I am, quite unashamedly, a fan of Jackass. It's scrappy as all hell, and for every sketch I find funny there's easily at least one that I find tedious or just plain stupid, but on a laugh-per-minute ratio it's constantly been satisfyingly high, and in among the dick and fart jokes there's even the occasional moment of savage cultural comment on contemporary American values. A case in point: early into Jackass presents Bad Grandpa, the fourth and most recent film in the series, an elderly man appears to have his genitals stuck in a vending machine. Passersby, entirely unaware they're viewing a secretly filmed prank, don't help the man at all. They don't even call the police. They do, however, laugh themselves stupid at his expense and all record him with their mobile telephones. God bless America. What lovely people.

Bad Grandpa is something of an experiment for the Jackass team. Whereas previous films featured a string of sketches and simple gags, this film attempts something in the way of a continuing narrative. Irving Zissman (a heavily made-up Johnny Knoxville) is an elderly widower whose prison-bound daughter forces his grandson onto him. Together he and young Billy (Jackson Nicoll) take a road trip from Nebraska to North Carolina in order to leave Billy with his estranged, drug-dealing father.

So the basic set-up of the film is that Knoxville and Nicoll are actors, and everybody around them with whom they interact are unsuspecting members of the general public. The film uses the framework to hang on a string of sketches and pranks. Some of them work, some of them don't. At least one of them made me laugh harder and longer than I have in about a year.

Knoxville does what Knoxville does, but the real star of the piece is Jackson Nicoll. He delivers a brilliant performance, sucking in random strangers and providing many of the film's best laughs. I'm interested to see where he goes from here: he certainly has the talent to make a solid career for himself.

There is a continuing problem with the film, however, in that we're constantly aware of its artificial nature. As a result there's no chance we're going to be sucked into the story in any meaningful sense. It works sufficiently well as a structural device, but I do wonder if the film might have been even funnier had they simply made a series of sketches along the general theme. As it stands it's the least funny of the Jackass films, passably enjoyable when it really needs to be constantly hilarious. Still, I appreciated the attempt, and I'm not so po-faced as to pretend I don't find explosive diarrhea incredibly funny.
Posted by Grant at 9:49 AM