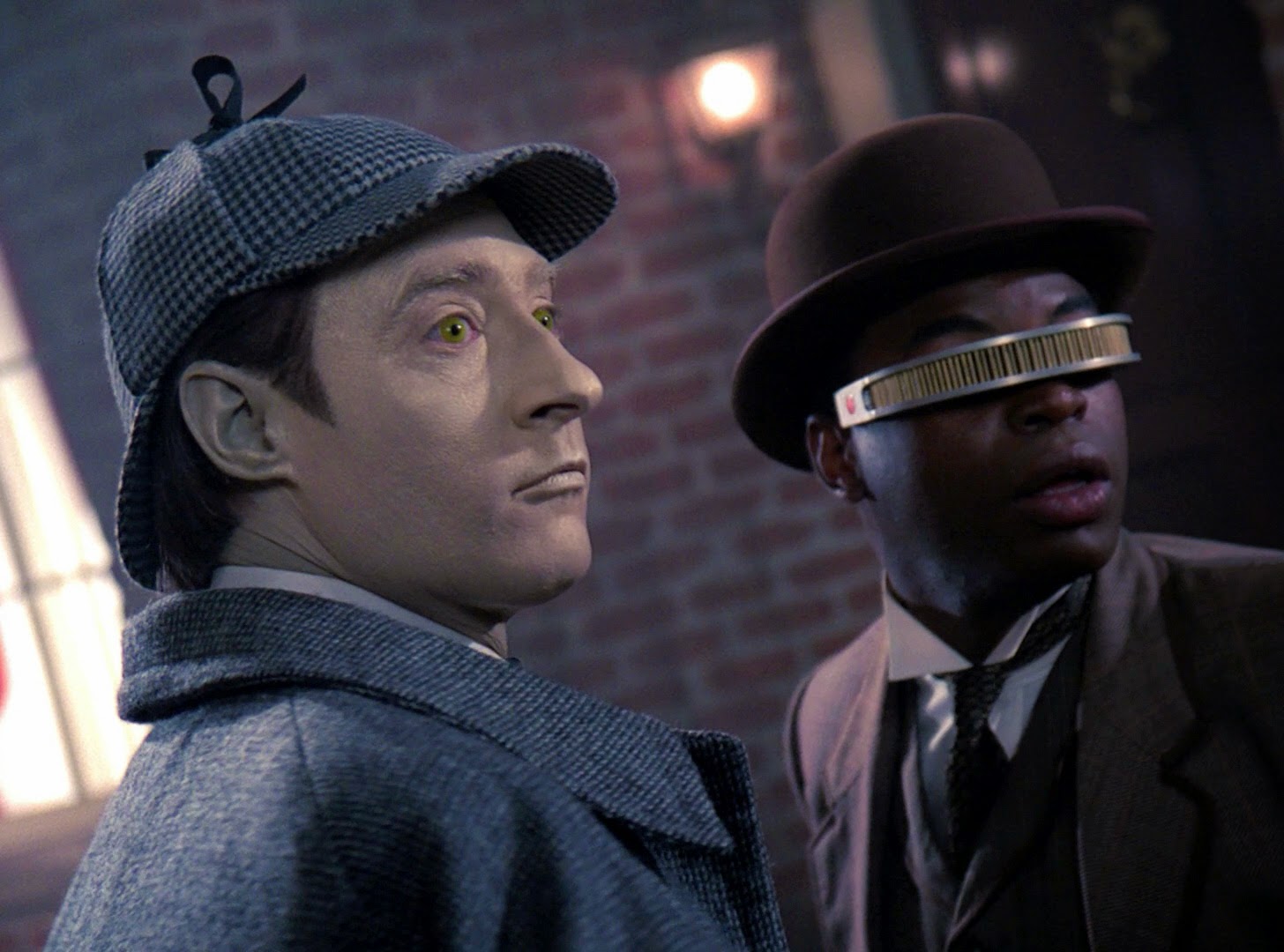 With some leisure time available, Data and La Forge embark on a holodeck adventure based on Arthur Conan Doyle's Sherlock Holmes stories - with a doubtful Dr Pulaski in tow. When the Enterprise computer is instructed to prepare a mystery that would be a genuine challenge for Data, it somehow bestows sentience on one of the game's characters - a character that now wants to be free from his holographic prison.

Katherine Pulaski is such an appalling racist. She's been on the Enterprise for three weeks now, and despite all evidence to the contrary she continues to treat Data like a mechanical thing rather than as a self-aware, conscious individual. It's all rather offensive, particularly since Pulaski seems to afford more respect to Professor James Moriarty, the holodeck character that has become self-aware. You'd expect there to be some payoff by the end of this episode, where Pulaski apologise to Data and promises to treat him with respect, but instead we're found wanting.

How much you enjoy this episode comes down, I suspect, to how much rope you're willing to give Star Trek when it comes to holodeck episodes. They're clearly a riot for the cast, enabling them to dress up in silly costumes and play out all manner of pop culture archetypes. The risk is that they become self-indulgent, or even actively unbelievable. Consider this is the second major malfunction of the holodeck in less than a year (see "The Big Goodbye"), despite a thorough refit of the system in between (see "11001001"). It's beginning to look as if someone will need to die in order for Starfleet to take the threat seriously.

All that said, this episode is hugely enjoyable. Brent Spiner and LeVar Burton clearly have a whale of a time playing Holmes and Watson, and that enjoyment is infectious. Add in Daniel Davis as Moriarty and it seems even better: Davis is a great actor, and despite being an American plays a posh British man extremely well (he subsequently does this for years in popular sitcom The Nanny). The idea of an artificially generated simulation becoming sentient is a great one for a science fiction drama, and it's only a shame that it will take until Season 6 for the storyline to continue. (The estate of Arthur Conan Doyle, or at least those claiming to be the legitimate estate - it's all rather murky - kicked up an enormous stink over this episode, claiming it breached their copyright. It took another four years for Paramount to resolve the legal issues and use Moriarty again.)

As a Holmes adaptation the episode is visibly more influenced by 20th century pop culture than the actual Conan Doyle stories. Nowhere is this more apparent than in Data's costume, which reflect Basil Rathbone's famous portrayal far more than the Holmes of the short stories.

This episode is simply immense fun, and a huge step up from the first two episodes of Season 2. Three episodes in, and we're bumping the season score up to 33%.
Posted by Grant at 9:13 AM