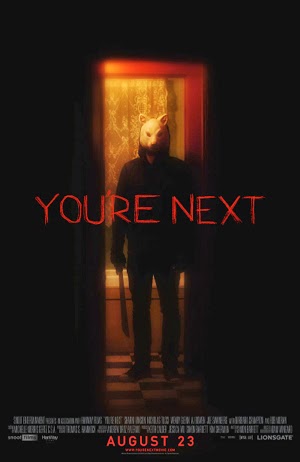 You're Next is a brutally violent home invasion thriller in which events are pushed to such bloody extremes that it winds up more like an exceptionally bleak comedy. A rich American family assemble at their vacation house, only to find old rivalries and tensions rising up between the siblings. Just when a particularly hostile dinner conversation reaches a climax, somebody outside the house starts shooting at the family with a crossbow. Things go horribly, gorily awry from there.

The film is directed by Adam Wingard, one of a current group of active, interesting American filmmakers who are giving us a lot of the better horror films of recent years. Wingard was primarily responsible for the portmanteau film V/H/S and its sequel, as well as the intriguing thriller A Horrible Way to Die. You're Next was produced in 2011, although it didn't get a mainstream release until last year. It treads that difficult line that all slasher films must follow: stray too far from the formula and you're not a slasher film any more. Hew too closely and you risk being derivative or even ridiculous. For the most part Wingard sticks pretty closely to formula, save for one crucial spanner in the works.

Much of the film will remind you of other films, notably Bryan Bertino's gory, nihilistic thriller The Strangers, which shares a basic premise as well as a trio of mysterious masked assailants. Where The Strangers was almost unwatchably bleak, however, You're Next deliberately pitches the action up a notch to make it actually rather funny. It's a pitch-black kind of comedy, but comedy nonetheless.

I mentioned the spanner in the works: that turns out to be Erin (Sharni Vinson), girlfriend of one of the rich family members under attack. She's out of her element - introduced to a rich, in-fighting family she isn't familiar with - but when the crossbow bolts start smashing through the windows she turns into a driven, level-headed slasher-fighting machine. It's not unusual to see a slasher film with a female protagonist - indeed, that's the norm for the genre - but it is odd to see one so capable and effective in turning the tables on the intruders.

Also in the film's favour is it's taut 95 minute running time. It gets in, sets up the characters and then runs headlong through buckets of blood and gore. In many ways it's an exemplary horror film: it sticks close enough to the rules to satisfy its fans, but adds enough of a fresh wrinkle to actually add to the conversation.
Posted by Grant at 12:25 AM