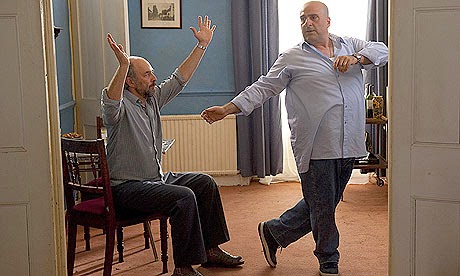 Mahmud Nasir (Omid Djalili) is a Pakistani Muslim living in suburban London. He’s pretty relaxed about his religion, but he’s a loving husband and father. When his mother passes away, and he needs to clear her possessions from her home, he discovers an adoption certificate. It turns out that Mahmud, a proud (albeit slack) Muslim, is not only adopted but he was born Jewish.

The Infidel (titled The Reluctant Infidel here in Australia) is a 2010 comedy from the United Kingdom. It was written by popular comedian and novelist David Baddiel, and directed by Josh Apignanesi. This is a really funny movie. It’s also, fairly obviously, a pretty bold and brave one. It walks a very narrow tightrope – it pokes an awful lot of fun at Islam and Judaism, particularly the extremist ends of organised religion, but at the same time it comes across as largely respectful of both.

Omid Djalili is a very funny comic actor, and this script is perfectly tailored to his talents. To discover his Jewish roots Mahmud ultimately connects with Lenny Goldberg (Richard Schiff) a Jewish taxi driver from New York. Schiff will be best known to viewers from playing Toby Ziegler in the television drama The West Wing. If you never leave the multiplex, however, he’s also Eddie, the guy who got eaten by two T-Rexes in The Lost World: Jurassic Park. Schiff has a strong gift for comedy that we got glimpses of in The West Wing, but it’s only here that I’ve really had the chance to see him doing comedy at full-tilt, and he’s hilarious.

Much of the film plays as a sort of religious-themed non White-Anglo-Saxon version of The Odd Couple, and that’s no bad thing. They devote several minutes to Mahmud learning how to say “Oy”, which is a lot funnier than that probably sounds.

To be completely fair, the climax of the film is where it falls apart. This is a really common problem with films of this type, where a situation has been created by the writer to engineer the maximum amount of comedy, but that situation doesn’t necessarily lend itself to a cohesive, gripping, three-act narrative structure. So there’s a fairly weak b-plot that runs through the movie, where Mahmud’s son has become engaged to the daughter of a conservative anti-western Pakistani Imam. It does allow the film to tackle some thornier issues of Islamic extremism, but at the same time it doesn’t mesh very well with the broad comedic tones of the rest of the piece, and its resolution is fairly trite and unbelievable. That ultimately doesn’t matter too much: the characters, particularly Mahmud, Lenny and Saamiya, are wonderfully written and performed, and the bulk of the comedy is laugh-out-loud funny.
Posted by Grant at 9:50 PM