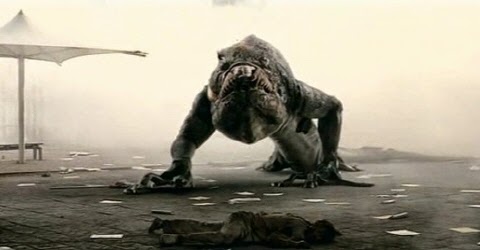 Let me tell you about The Host. If you’re a fan of monster movies or South Korean cinema, it’s very likely that not only have you heard of, you’ve almost certainly seen it. You probably even own the DVD. And so you should, because this South Korean monster movie is one of the best motion pictures you’re likely to find, both in its home country and its genre.

There’s a creature stalking the Han River. Some people it kills and eats. Others it captures, and drags back to its lair, so that it can kill and eat them later. It’s an absolutely nightmarish creature, all legs and teeth and tentacles, too odd to fully identify and too fast and violent to see properly. Making a decent movie monster is hard work. It’s easy to make it look ridiculous, or unintentionally funny. The monster of The Host isn’t funny or ridiculous. It’s one of the scariest-looking things ever committed to film.

Its entrance, slipping down from under a bridge before rampaging across a local park, is a masterwork of action and suspense. I don’t think there’s been a scene as good as this since Jurassic Park, and I don’t think there has been a scene to equal it since The Host. A lot of people like Jurassic Park, as well as Jaws, and The Host is as effective and entertaining a thrill ride as both of those films.

And it’s as good as those two Spielberg movies because its director, Bong Joon-ho, centres his story not on visual effects or scary monsters but on character. The film follows a slightly odd, slightly troubled family. Gang-du (Song Kang-ho) is a seemingly useless snack food vendor. He’s not very bright, and he’s not very athletic. He runs the food stall with his father (Byeon Hee-bong) while caring for his daughter, Hyun-seo (Ko Ah-seong). When the nameless creature bursts onto the shore of the Han River and steals away with Hyun-seo, Gang-du must gather up his courage and wits – along with his father, brother and sister (Bae Doona and Park Hae-il) – and hunt the monster down.

Another major part of The Host’s appeal, beyond a stunning monster and highly appealing characters, is how effectively it crosses genres. There are parts of the film that are as frightening as you will find in a horror movie. Other parts are serious, tense drama. Yet more include laugh-out-loud moments of broad comedy. Bong Joon-ho slips from one tone to another with ease, and manages to tie all of the elements together so that it never feels like anything less than a seamless, captivating movie experience.

Song Kang-ho is fantastic as Gang-du. As I’ve mentioned, he’s far from an exceptional person. He doesn’t have any special skills or talents. He is not any form of action hero, yet through his perseverance and increasingly desperation to save his daughter, he becomes something better than your average action star. He’s a hero who’s ordinary, and thus a hero you can readily believe in. Song is one of South Korea’s most engaging actors, having also appeared in such hits as Sympathy for Mr Vengeance, JSA: Joint Security Area and Shiri. I think The Host is his best performance.

The Host works because it presents a broadly appealing, highly commercial story, yet presents it in an inventive and unusual way. The rules to this sort of film that matter – strong characters, tight editing, good design – are all followed to the letter. The rules that don’t, like hiding your monster from view or making your protagonist a violent soldier or police officer, are largely abandoned in favour of something more interesting. In fact The Host is more than interesting, and more than really good. I think there’s enough inventiveness and creativity going on here that you could justifiably describe it as unique. It’s also completely unmissable.

This review was originally published at the Eiga: Asian Cinema website.
Posted by Grant at 5:02 PM