Star Trek: The Next Generation: "The Child" 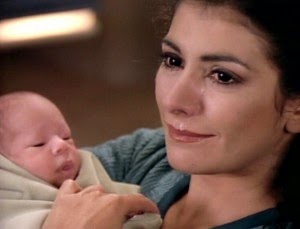 So we're back onto the Star Trek: The Next Generation bandwagon with a review of the Season 2 premiere, "The Child", aired all the way back in November 1988. In "The Child" a mysterious alien presence invades the Enterprise and finds its way inside Counselor Troi. She then gives birth to a human-like child, who rapidly grows from infancy at a frighteningly accelerated rate. Meanwhile the Enterprise is transporting a dangerous set of plague specimens that will kill the entire crew if released.

Before going into the episode itself, it's worth looking at Season 2 as a whole because they have been a few changes. Firstly Gates McFadden has followed Denise Crosby's lead and quit the series. In her place, rather oddly, is Diana Muldaur as Dr Katherine Pulaski. I say oddly because for some reason she is never credited in the opening titles, but instead spend the entire year making a "special guest appearance". She's an older, crankier medical chief, deliberately styled more like the original Star Trek's Dr McCoy. It's fascinating that, as the show struggles to find an identity for itself, it's first major response is to make it more like the original series, when apeing the original is actually one of its biggest problems.

Another newcomer to the cast is Oscar-winning actress Whoopi Goldberg as Guinan, the bartender at the Enterprise's new mess hall Ten-Forward. She's an engaging and pleasant character, not to mention rather mysterious, and is well played by Goldberg through her numerous guest appearances for the rest of the series. Goldberg pursued a role in the series personally, citing Nichelle Nichols' performance as Lt Uhura in the original Trek as one of the reasons she went into acting in the first place.

There are a few crew changes. Lieutenant Worf has now replaced the late Tasha Yar as chief of security, shifting from a red to a yellow uniform. Also making the colour jump is Lieutenant La Forge, who's now installed as the Enterprise's chief of engineering. There was a deliberate attempt not to focus on engineering in Season 1, ostensibly because Gene Roddenberry insisted that 24th century engines wouldn't break down, but the story opportunities were too numerous to have the position left to a series of interchangable chiefs. Wesley Crusher has remained onboard, despite his mother's departure, and shifts rather neatly in this episode into more of an Ensign Chekov kind of a role which suits him well. As I said, Season 2 seems all about shifting closer to the cut of the original series, with analogues for Chekov, Scotty and McCoy now firmly in place.

The biggest challenge facing Season 2 was the 1988 strike by the Writers Guild of America. Without sufficient time to prepare scripts the season started late (November instead of September), consisted of 22 instead of 26 episodes, and in the case of "The Child" reused a script originally written for Star Trek: Phase II back in the late 1970s.

And it's a terrible episode. Something very traumatic happens to Deanna Troi, but the crew don't seem particularly good at acknowledging the violation. She becomes immensely attached and motherly to her child when most intelligent people would be terrified senseless by what it might be. She winds up with an attachment that seems ridiculous given the speed at which he grows and the short length of time he lives with her. Of course by the end of the episode everything is all wrapped up, and it feels like the events will have no lingering emotional effects upon anybody - which, of course, they don't.

I was also quite taken aback by Dr Pulaski. I remember back during the original broadcasts being quite a fan of the character, and certainly preferable to Dr Crusher. Watching it with the benefit of a few decades, however, she comes across as quite abominably racist towards Commander Data, clearly regarding him as a quaint novelty rather than a sentient creature. It's such repellent behaviour that I had difficulty liking her character at all.

Brent Spiner gets a chance to play some comedy out of Data acting as Troi's birth coach, and Wesley's requests to remain onboard the Enterprise generate some nice moments of character and humour. They're pretty much the only two good things I can note in this episode.

Sadly with such a bad episode it means that Season 2 is kicking off at 0%. Hopefully future episodes will lift that up a bit. I do remember Season 2 being a major improvement over Season 1, but I guess we will find out in the coming weeks.
Posted by Grant at 3:27 PM