Babylon 5: "A Late Delivery from Avalon" 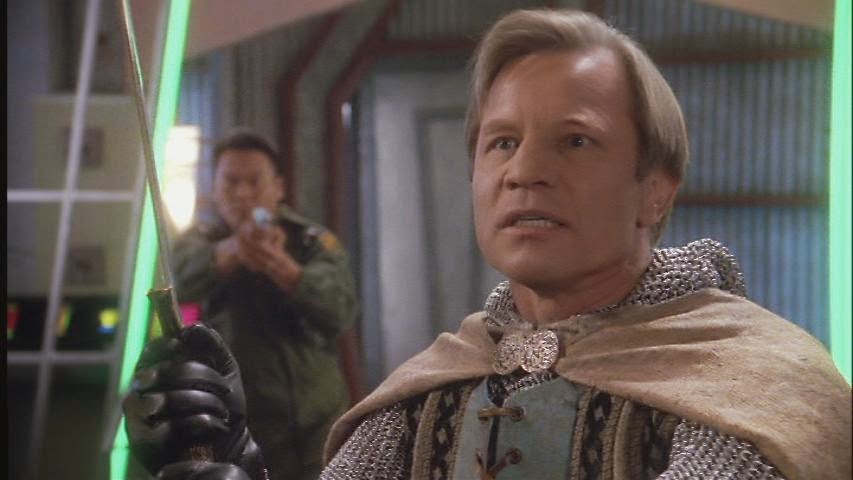 I was dreading watching this episode from its basic premise: a man arrives on Babylon 5 claiming to be the King Arthur of British legend. It's the sort of ridiculous premise that J. Michael Straczynski loves on Babylon 5, whether it's Sheridan meeting Jack the Ripper or people travelling the galaxy searching for the actual Holy Grail. Sometimes it seems like there's no story idea too wacky and no premise too unwatchable for JMS. I steeled myself for another round and started watching.

Against my expectations, "A Late Delivery from Avalon" turns out to be a pretty good episode. It surprised me more than once, and it was a pleasant surprise each time. "Arthur" is played by Michael York, the first of the pleasant surprises since he's an excellent actor and gives his character a lot of dignity. The script allows him to interact with several lead characters - chiefly Dr Franklin, G'Kar and Marcus - and the encounter shines fresh lights on each of them. The episode's conclusion - and Arthur's true identity - is an effective and intriguing surprise. This is why I've been enjoying this slow rewatch of Babylon 5. While many of the episodes confirm my suspicions that the series is not for me (that's my polite way of saying it's pretty awful), the odd gem like this really does surprise me. There's something to this show - it doesn't get it right half of the time, but when it does it's often quite distinctive and special.

The greatest relief in watching the episode is the discovery that Arthur is, in fact, an ordinary Earth Force veteran who suffered an emotional breakdown after the disastrous first contact between humans and Minbari. Straczynski's script makes great use of the series' own backstory by tying Arthur's personal history in to this pivotal event, where a misfire brings about the Earth-Minbari War.

G'Kar gets a great early sequence joining Arthur in battle against some lower level thugs. Their subsequent carousing in a bar is probably the episode's highlight.

It's also nice to see the characters be aware of their own series. Given that Sheridan did indeed meet Jack the Ripper in Season 2's "Comes the Inquisitor", it's nice to see the command crew genuinely consider the possibility that Arthur may actually be who he says he is. After all, stranger things have happened to all of them by now.

My only quibble is the sword and the armour. I can accept that Arthur is a broken man who's latched onto half-remembered children's stories to cope. I just can't for the life of me work out where in his galactic travels he got the broadsword and the chainmail.

This is a good episode, and a surprisingly good one at that. It leaves Season 3 with nine good episodes out of 13, or a running score of 69%.
Posted by Grant at 7:45 AM