Trust me, buy the Jaws blu-ray 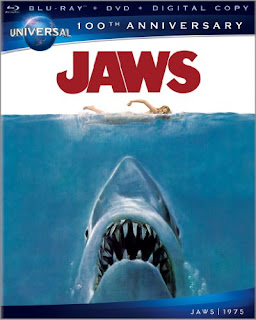 As part of their 100th anniversary celebrations Universal Pictures has released to blu-ray what is arguably one of the best films the studio ever produced: Steven Spielberg's Jaws. This isn't a review of the film itself; rather, it's just a quick note to strongly recommend you buy it.

Blu-ray hasn't felt particularly amazing when I've watched recent movies - let's say anything made post-1990. I'm sure the picture and sound quality of these later films is exceptional, but being completely honest I've never actually noticed it. Watch anything over 30 years old and the difference is remarkable. Fine details you never had the chance to notice before are suddenly apparent. The sound is vivid. As a filmgoing experience these older movies are giving me more than I've received watching some of them off 35mm in a cinema.

Jaws is truly something. It was already one of my favourite films, and technically speaking it's still one of Spielberg's best - hell, anyone's best. This new release however is so visually crisp and audibly clear that it's been like watching it for the time all over again.

The disc comes with a bunch of special features which I haven't sampled yet, including the documentary The Shark is Still Working, so I can't comment on those. For the film alone, however, this is a must-buy. If you own a blu-ray player, this is the sort of film you should be purchasing.
Posted by Grant at 10:55 PM