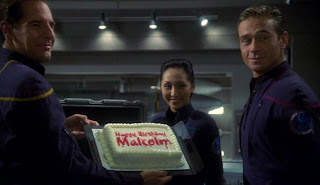 Some episodes of Enterprise have really surprised me with how exciting and dramatic they've been. "Cold Front", for example, had time travel, secret agents sneaking around the ship and a really dark, menacing tone. "The Andorian Incident" had shootouts, espionage and high-stakes drama. "Silent Enemy" has Hoshi trying to find out what Lt. Reed's favourite food is.

I'm not joking about this. Half of the episode is spent with Captain Archer using the new subspace communications technology to grill Reed's parents on his favourite food, and Hoshi subsequently gives the system a workout interrogating Reed's sister, friends and former colleagues. She even convinces Dr Phlox to violate doctor-patient confidentiality in her hunt for the answer. Apparently it didn't occur to anyone among the 83 crew members of the Enterprise to walk up to Reed and ask "Hey man, what's your favourite food?"

Here's a hint: it's pineapple.


It's amazing how one asinine episode can spoil my entire impression of the series so far. This episode is a trivial waste of time. It's poorly scripted, with a pointless plot and dreadful cliche-ridden dialogue. "Pineapple! My favourite! But... how did you know?" is an actual line that Dominic Keating has to deliver with a straight face. It's enough to make you mourn for the glory days of Star Trek V: The Final Frontier.

It's sad, because I've been noting the problem that until now the series has been willfully ignoring Malcolm Reed. He hasn't been the focus of an episode until now, and he hasn't been given any opportunities to stand out or be the centre of attention. Thankfully it's his birthday this week, so his crewmates have given him a birthday cake, a beer and one of the worse episodes of Star Trek ever made. 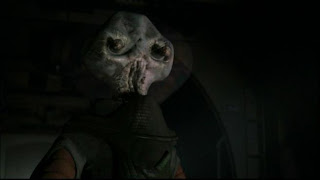 There is another side to the episode, in which the Enterprise is being constantly threatened by a silent alien vessel that cruises in, takes a few potshots, and flies away again. Members of its crew even sneak aboard the Enterprise and take out a few crew members. This had the potential to be really exciting, were in not for the fact that the exact same thing happened last episode.

This is the first all-out bad episode of Enterprise so far: one of those Star Trek episodes that people should be warned about like The Next Generation's "Sub Rosa" or Voyager's "The 37s". Now maybe you're annoyed at me for spoiling the secret of Reed's favourite food. Maybe you've been reading these reviews and thinking about watching some Enterprise yourself. If so, remember: it's pineapple. I just saved you 40 minutes of your life.

Eleven episode in, and seven have been good. Enterprise's running score has just dropped to 64%.
Posted by Grant at 9:44 AM