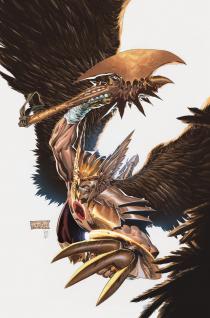 I am a big fan of Hawkman, irrationally so, and so when DC announced one of their New 52 launch titles would be The Savage Hawkman I got pretty excited. The character had suffered over the previous 30 years from reboot after reboot, each of which seemed to complicate his origin and backstory more than you'd think was possible. Was he simply an archaeologist with a cool costume? A reincarnation of an ancient Egyptian? An alien from the planet Thanagar? The answer seemed to simultaneously be yes, no, maybe, sometimes and a mixture of all three. The line-wide reboot seemed a great opportunity to finally clean the character up, pick one origin and stick to it, and return to telling great stories of fighting crime with wings and a really big mace.

Unfortunately the published comic left a great deal to be desired. The origin still seemed unclear to me, Philip Tan's art didn't seem to be a great fit for the character and the storyline seemed confused and unsure, as if editorial mandates were changing every month as the sales continued to plummet. Tony Daniel was the writer, and as I mentioned last time when discussing Detective Comics I don't think writing is his strongest suit. At issue #9 a new creative team was dropped in, with Rob Liefeld plotting and co-writing with Mark Poulton and Joe Bennett providing the art. Unsurprisingly it took three issues for Liefeld to introduce a Deadpool clone, which I find hilarious since Deadpool is a noted Deathstroke clone and Liefeld has been writing and drawing Deathstroke as well. Joe Bennett's artwork has been great, however, and gone a long way to making the title about as enjoyable as its been since it debuted last September.

So how badly have the sales been on The Savage Hawkman? To what extent did Rob Liefeld's much-heralded appointment save the comic? 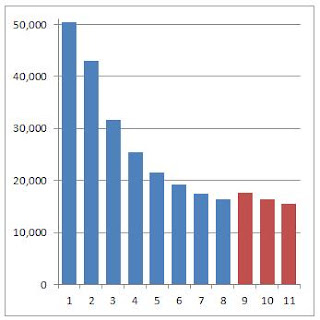 Rob Liefeld's arrival as plotter and co-scripter for The Savage Hawkman (marked in red) resulted in a 7% bump in sales for issue #9, followed by a drop for issue #10 that left it 0.3% below the sales for #8. DC would have been better off re-invigorating interest in the title by chucking one of the Talons of Night of the Owls in there: sales for Batgirl spiked by 33% in issue #9, and #10 was still 7% above sales for issue #8, and sales for #11 were still 2% higher. In its ninth issue Fury of Firestorm had a crossover with Justice League International that caused a 12% bump, with #10 sales still 3% above #8.

Any way you slice or skew the data, it's pretty obvious that Rob Liefeld's appointment to The Savage Hawkman had a negligible positive effect on sales. It's even arguable that his arrival - once an extra 1,000 readers had temporarily jumped on to check it out - actually drove more readers away.

Now that Liefeld has acrimoniously quit DC Comics I don't see The Savage Hawkman lasting for many more issues. There are rumours that the next big cull of New 52 titles will take place in January, and with the character being added to a new Geoff Johns/David Finch Justice League book in 2013 I can't see his solo title hanging around past issue #16.
Posted by Grant at 9:38 AM