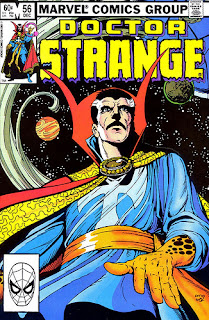 Dr Stephen Strange, master of the mystic arts, unexpectedly allows a TV camera crew into his house to recount his entry into the world of the occult. The camera crew are not what they seem to be however - but Dr Strange is still one step ahead.

I've been going comic book crazy lately, not only continuing to buy new titles each week but scouring local comic shops and the Internet for trade paperbacks and individual back issues that strike my fancy. Trade paperbacks may be easier to stick on a shelf and loan to friends, and they're certainly much more durable, but there's still something nice about a 20-24 page magazine-format comic that you can flip through and enjoy. For one thing there's rarely a spine to accidentally crack.
Since I've been reading a lot of individual, often relatively old comics, I figured I may as well review ones that particularly take my fancy. This issue, written by Roger Stern with art by Paul Smith (pencils) and Terry Austin (inks), is a great example. I've always been a big fan of Dr Strange without actually reading that much of his comic, and since I've hit the point where I would actually buy a monthly comic Marvel have rudely refused to publish one. Here Strange is interviewed about his past, which makes for a great introduction to new readers, before revealing he knew the TV crew were evil demons in disguise all along, and proceeds to battle them across his own home in Greenwich Village.

That's one feature that always amuses me about Marvel's superheroes. While DC spreads its characters across a wide variety of mostly fictional cities, Marvel's heroes seem to be all shoved up into New York City. Spider-Man gets Manhattan, Daredevil gets Hell's Kitchen, and so on. Dr Strange, far more laid back and urbane than his contemporaries, gets to patrol the Village. 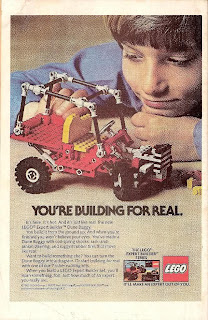 The demonic trio Demonicus, Adria and Kaecilius, former servants of the villainous Baron Mordo, had previously fought Strange in Strange Tales #143. I haven't read that comic, and I'm pretty sure I haven't these characters in another comic ever. Despite this Stern has written such a strong script that I didn't need to know their backstory. Everything I was required to know was told to me within the comic. That's a feature of older comic books I really appreciate. Nearly every issue simultaneously continues a long-running narrative for regular readers while providing constant little hooks for those new to the title.

This comic also gets special bonus points for it's awesome Lego advertisement on the back cover, created in a far off time when Lego meant building things and not adapting big-budget movie franchises. (Of course, that said, it totally goes without saying that I would buy the hell out of a Dr Strange Lego set.)
Posted by Grant at 11:56 PM