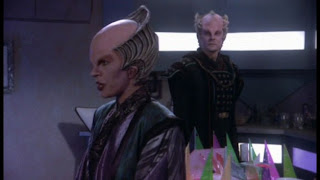 A Minbari battle cruiser arrives at Babylon 5 as part of a lengthy tour displaying the dead body of one of their greatest war heroes - but when the body goes missing, the situation rapidly turns ugly. Meanwhile an orphan hiding in the station's lower levels begins to exhibit telepathic powers - putting Ivanova and Talia Winters into conflict over the girl's future.

Oh thank goodness, a decent episode. "Legacies" is a wonderful palette cleanser after the tedious cliches of "Eyes" and "Grail". It draws on several of the series' ongoing plot threads and teases out a little more clarity and information on each. It's all still a little too broadly drawn for my liking, but it's certainly a massive improvement.

The main plot returns to the mystery of the Earth-Minbari War, the Battle of the Line and Ambassador Delenn's role in the enigmatic Grey Council. It also introduces the character of Neroon, a highly-ranked member of the Minbari warrior caste who will recur throughout the remainder of the series.

There's some great writing here, mainly through plot than through the actual dialogue, that explores the difficulties of revisiting the events of war during peacetime. The dead general being displayed led the Minbari forces during the Battle of the Line, and was directly responsible for the deaths of many of Sinclair's fellow Earth Alliance pilots, yet now the commander is forced to pay tribute and honour his former enemy. At the same time Neroon makes it clear that in his opinion the war should never have ended.

This episode also brings to light a new mystery for Delenn: what is she building in her quarters? What is the meaning of the word "chrysalis". This episode was originally intended to be the penultimate one of the season, but I actually think it works much better here, and provides a longer lead-up to the season finale. 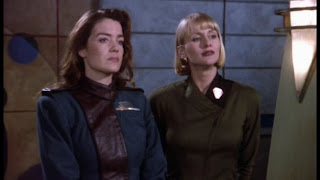 The telepath storyline provides a great opportunity to put Ivanova head-to-head with Talia over whether or not this orphaned teenage girl should be sent to the Psi Corps. The series is making no secret of the fact that the Psi Corps is an innately dangerous and corrupt organisation, however Talia is allowed to make her case with integrity and honesty. It's great character work, and the ultimate conclusion points to a new direction between Ivanova and Talia. Having seen the series before, it's head-smackingly obvious where this is going, but when I first watched it the subtext flew right past me. It's actually nice to see Talia in the series at all - it feels like she's barely been in it since the first episode. The same goes for Na'Toth, G'Kar's diplomatic aide, who shows up for a scene here.

The resolution of one storyline cleverly provides the solution for the other. I like it when script writing does this: it's neat, tidy and ties the episode together into a cohesive hole. Compare this, for example, with the Enterprise episode "Silent Enemy", where the two narratives in the episode don't connect with each other at all.

This episode was written by D.C. Fontana, one of the most talented and influential writers of the original Star Trek. Pretty much every American science fiction drama owes Fontana (plus Gene Coon, and others) an enormous debt of gratitude, and it's nice to see her writing here. You can definitely notice the leap in quality of storytelling. I raved about her earlier episode "The War Prayer", and while "Legacies" doesn't quite hit the same heights it's still very enjoyable.

So that's 17 episodes into the season, with only five more to go. The running tally is six good episodes this season, or a score of 35%.
Posted by Grant at 9:42 AM