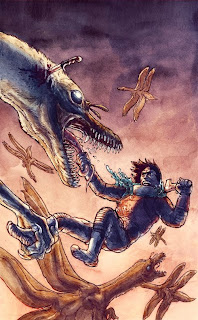 Reviews of the comics I purchased this week are under the cut, as always, but first up I wanted to draw your attention to a trade paperback coming out this week. The first six issues of the revived Prophet have been collected together in a specially priced trade - US$9.95 or your local equivalent. This is an exceptional price for six comic books, even more so because Prophet is one of the best new series of the year.

It's actually an old Rob Liefeld comic, but don't let that put you off. It has been re-envisaged by writer Brandon Graham into a surreal science fiction epic. Fans of French science fiction of the likes of Jean "Moebius" Giraud should run to their local comic shop to buy this. It's strange, eerie and absolutely beautiful to look at. Science fiction fans take note: I expect to see this on the Hugo Awards ballot in 2013 for best Graphic Story alongside Vaughn and Staples' Saga.

The first year of Gray and Palmiotti's re-invigorated Jonah Hex comic rounds off with some knowing nods to Batman history as well as wrapping up an exceptional first 12 issues of gunslinging adventure. That All-Star Western is an entertaining western comic book is impressive enough - the fact that it seamlessly and comfortably slots into the DC Universe in the fashion that it does is a little short of miraculous. This is, now that we've got a whole year's worth to consider, one of the standout titles of the New 52. (5/5)

It's been running for six years, but Grant Morrison's Batman opus genuinely feels as if its shifted into its final act. All of the various elements from Batman, Batman & Robin and Batman Incorporated are beginning to feel like chess pieces being manouevred towards an endgame. The beauty is that I still can't quite decide what that endgame will be. This issue (delayed following the Aurora shootings) combines so many different elements in such an apparently effortless way. I am particularly impressed with the two page spread towards the end depicting young Damian invisibly taking down a team of guards and mercenaries - it's graphic storytelling at its finest. Plus Batcow returns. (5/5)

Much like All-Star Western, The Flash has sneaked in through the back door and taken the New 52 by surprise. A lot of attention has been cast on books like Batman, Wonder Woman and Earth 2, and all the while The Flash  has been quietly generated some of the best superhero adventure on the market. It's also one of the new New 52 titles to genuinely feel as if it's been rebooted: all of the elements are the same, but they've been rejigged and re-designed just enough to come across as something new. Here we finally see the Rogues united for the first time in the New 52, led by (as far as I'm aware) new villain Glider. Francis Manapul's art and layout is an absolute star in this book: more subtle than J.H. Williams III on Batwoman but just as effective. (4/5)

Image is absolutely on fire when it comes to science fiction comics. I've mentioned Prophet above, and I've recently been raving about Saga and Debris. Add to the list Planetoid, a stylishly drawn and well written story of a man named Silas trapped on a post-apocalyptic industrial wasteland. The storyline takes a sudden new direction with this issue, one that moves it away from feeling a bit like a Prophet clone and more into its own territory - this is a good thing. Garing's got a beautiful art style as well. Once again: science fiction fans and Hugo voters, you should probably be reading this book. (4/5)

Winner of the Week: All things considered, I'm going with Batman Incorporated.
Loser of the Week: This week, there really isn't one. I only bought four comics, but all four have been incredibly good. If only all weeks were like this!
Posted by Grant at 10:47 PM