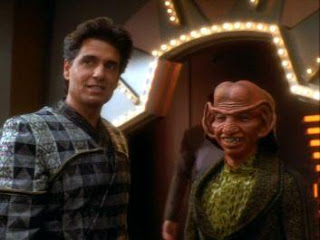 A charismatic con artist (Chris Sarandon) comes into possession of a strange electronic game, and manages to spin it out into a rival entertainment business to Quark's. Meanwhile, Chief O'Brien has constructed a racquetball court on the station, and has challenged Dr Bashir to a game.

This is usually remembered, in the style of Friends, as "The One With Chris Sarandon". He's a gifted comic talent, having previously appeared in The Princess Bride, Fright Night and The Nightmare Before Christmas (his voice did, at any rate). He brings a lot to the table in this episode as the El-Aurian con artist Martus. There seems to be a requirement with El-Aurians to be played by famous actors. Sarandon plays one, Whoopi Goldberg played another, Malcolm McDowell played a third. While Goldberg got a lot of great stuff to work with over the years as Guinan, McDowell had to put up with a fairly tedious movie script and Sarandon hasn't fared much better.

"Rivals" has a lot to recommend it, but it's also almost annoyingly trivial. A little bit too much attention is paid to O'Brien being too out of shape to play racquetball any more. It's nice to see his and Bashir's friendship grow (they eventually become full-on BFFs) but it's just not an altogether interesting beginning. Similarly, whether or not Quark is losing money to a rival gambling hall doesn't particularly spark too much interest. Add in a strange phenomenon across the station where people are simultaneously tripping over and hurting themselves, and you have quite possibly the dullest premise of the season.

Bits are funny. Many parts are relatively entertainment. In the end, however, it's all just completely missable. Deep Space Nine Season 2 has scored another fail. That brings the season total up to eight good episodes out of 11, which isn't too shabby: 73%.
Posted by Grant at 10:04 PM