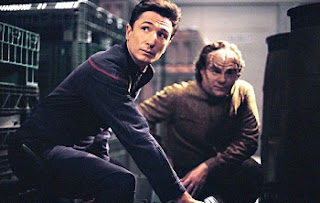 The Enterprise comes to the rescue of the Fortunate, a human cargo vessel under attack by Nausicaan pirates. By the time the Enteprise arrives the pirates are gone and the crew are stubbornly refusing assistance. The reason is being kept hidden from Captain Archer: a Nausicaan prisoner in one of the cargo holds, being repeatedly tortured for intelligence to get the Fortunate's crew their revenge.

"Fortunate Son" is a tightly produced, slick commercial hour of television. It's not exceptionally enlightening, nor is it particularly original, but it's solidly constructed and breezes by in an entertaining fashion. You could fault it for this: it's hard not to fail if you're deliberately unambitious, after all. So whether or not you enjoy this episode is probably going to be down to what you're expecting from it. I went in hoping for an entertaining TV episode, and certainly got it.

The Nausicaans are a funny Star Trek alien. They started life as an off-hand comment, deliberately named in tribute of Hayao Miyazaki's exceptional animated film Nausicaa of the Valley of the Wind. Beyond their name, they bear no resemblance whatsoever to that film. They're basically just another carbon copy set of bumpy-faced aliens. Why use the Nausicaans at all in this episode? The only logical answer I can come up with is "why not?" 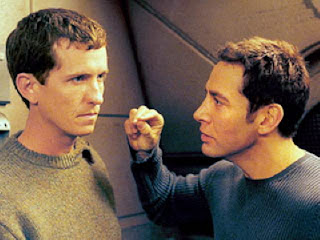 More interesting is that fact that, nine episodes in, Enterprise finally devotes a little attention to ship helmsman Travis Mayweather (Anthony Montgomery). Aside from a little snowman building in "Breaking the Ice" he's been barely present since the series started. Here we get to see his past fleshed out, given context and even provide him the opportunity to reflect on his choice to leave the family business (cargo transports) and join Starfleet. Anthony Montgomery plays it well - I get the impression he's quite a decent actor being deeply under-utilised.

The episode isn't perfect - there's an odd argument halfway through about how the Fortunate's acting captain doesn't want to upgrade his warp drive to shave four and a half years off his five year cargo trip, because it would break with tradition or some rubbish. He's a commercial operator: surely cutting his journey time down to six months would be a wonderful and highly profitable thing? It's a scene that demands a Simpsons-style screaming monkey: "Tell the people! This makes no sense!!"

So we're ultimately looking at a competent but relatively mediocre diversion. I'm giving it a thumbs up because, while it doesn't necessary do anything brilliantly, it doesn't really do anything badly either. It's watchable, but missable. That's six thumbs up for nine episodes so far, or 66%.
Posted by Grant at 1:34 PM