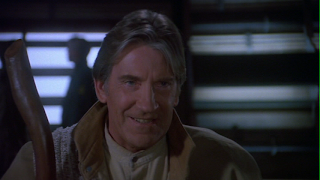 A mysterious stranger comes to Babylon 5. This one is, depending on your point of view, a travelling human monk on an endless quest through the galaxy to find the Holy Grail (yes, the actual holy grail), or a homeless wandering eccentric. 'Isn't this guy awesome?' ask Delenn and Lennier, who clearly have a long-held cultural love for homeless wandering eccentrics, and promptly demand that Commander Sinclair personally welcome Sir Wanders-a-Lot to the station. Meanwhile J.F. Sebastian from Blade Runner has apparently teamed up with Ambassador Kosh to suck the brains of anybody who might lead to him being arrested for racketeering and drug dealing. Or something.

Oh my me, this season is really beginning to feel like a trial. I was previously critical of J. Michael Straczynski's abilities as a writer, but I'm developing a newfound respect for the man's work by watching this string of Babylon 5 episodes written by other people. This one is by Christy Marx, and it may very well be the least enjoyable episode so far.

The bottom line is that this episode is ridiculously stupid. Someone travelling the galaxy in search of the holy grail of Arthurian legend isn't a noble cause, or a worthwhile pursuit. It's a result of mental illness. The reverence that Delenn and Lennier shows towards Aldous Gajic shows them up as either idiots or hopelessly naive. Or hopelessly naive idiots. Whatever option it is, they don't look good praising him as some kind of spiritual legend. He doesn't need a personal welcome by the station's commander; he needs medication and some therapy. By the episode's conclusion one of Babylon 5's workers has been persuaded to take up his cause, and it's treated like some noble redemption of that character. Personally I was resenting the entire regular cast for not shaking the man by the shoulders and screaming 'What are you doing with your life?!!'

They've tried to make Gajic seem a more reasonable and wise person by casting a middle-aged British actor with excellent received pronunciation - in this case David Warner (Time Bandits, lots of Star Trek, Titanic). It doesn't create the effect they're looking for, because - as with David McCallum many episodes ago - it just looks like what it is: a world-class British actor slumming it for a bit of cash on a second-rate cable TV series.

The subplot, involving the lower levels crime boss Deuce sucking people's brains out with a Na'Ka'Leen Feeder (I checked the spelling of that on the Babylon Project). We're supposed to think that it's actually Ambassador Kosh working for Deuce, and not a brain-eating squid in a look-alike encounter suit. I seriously doubt that any half-intelligent viewer believed for a second that this was the case. When the Feeder is finally revealed, it's actually a nice piece of production design and some very decent CGI. Then Sinclair and his buddies shoot it about 47 times in the head - seriously many, many times. I lost count. They basically keep shooting until that thing is a literal smear on the floor. Given it's a rare imported animal, I would have assumed they'd have tranquilised it and transported it safely to its home planet. Instead it's just too ugly to live. 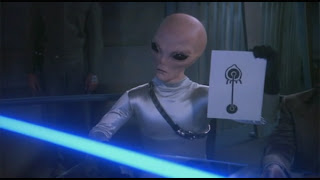 This episode basically has one great scene, which is over within the first five minutes of the episode. So feel free to watch that, and then turn off the DVD player and run outside and play. In terms of continuing storylines, all you need to come away from this is that:
15 episodes in. Five have been good. That's 33% good. With a season this brilliant, I'm amazed Babylon 5 made it to Season 2.
Posted by Grant at 9:04 AM