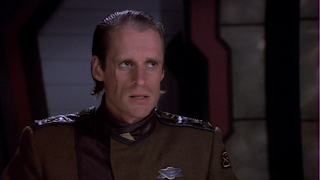 Garibaldi and Lennier rebuild a 20th century motorcycle. Commander Sinclair falls under internal investigation by an Earth Alliance Colonel, who's arrived on the station with a PsiCorp operative in tow, but who may have a personal vendetta of his own...

And he would have gotten away with it too, if it wasn't for those pesky kids. "Eyes" is woefully simplistic and trite, with cardboard cut-out characterisation and tediously cliched conflict. It's the sort of episode I used to point to after the first time I watched this series; that hideous blend of po-faced gravitas and Scooby Doo-level plots. A series that can't help itself from shouting from the rooftops how important and groundbreaking it is, all the while serving up something that would be a below-average episode of Star Trek. Or worse. Now I'm finding during this rewatch some episodes of Babylon 5 really are very good. Just not this episode.


There's some interesting stuff in the recipe for this episode. It gives Lennier (Bill Mumy) something to do, which the series hasn't really been doing since it started. Sadly what it gives him is the chance to build a motorcycle while watching archival videos about rebellion and male sexuality. It returns to the subject of Ivanova's hatred for the PsiCorp, except it does this through unintentionally hilarious dream sequences. It introduces some nasty Earth Alliance politics, only it rapidly drops that angle in favour of the old moustache-twirling villain routine. 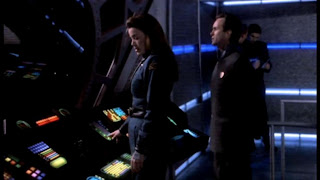 Jeffrey Combs plays the psychic Harriman Gray - I mentioned Combs before in a review of Enterprise's "The Andorian Incident", which was a much more enjoyable hour of SF television than this was. Combs really is a good luck charm for American telefantasy. He seems to crop up everywhere.

Playing Colonel Ari Ben Zayn is Gregory Martin. He's done a few other guest appearances in American TV, and Wikipedia informs me that he's the son of Beatles producer George Martin. He's dreadful, although I can't put the blame of Zayn's one-dimensional cartoon shenanigans all at his feet. The production team's seen fit to give him an unconvincing but mean scar.

The regular cast can't do much with what they've got. Sinclair broods and rages. Ivanova gets upset a lot. Garibaldi sorts of makes wry remarks and gets annoyed. Lennier just gets to make the viewer annoyed.

Some episodes ago I genuinely became hopeful about this series, and started to suspect I'd misjudged it back in the 1990s. Episodes like this just remind me that I'm probably right: Babylon 5 is the most overrated SF drama of all time, bar none. And I've still got 94 episodes to watch.

Five good episodes out of 16. Six episodes to go. The absolute best case scenario at this stage  is that Season 1 is going to ultimately score 50%. Right now it's scoring 31%.
Posted by Grant at 7:01 PM