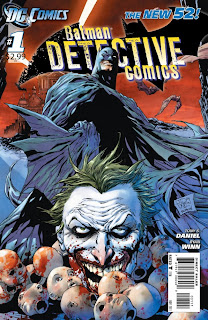 Of all the DC comics to get renumbered at issue #1, the only one that hurt me on a base emotional fanboy level was Detective Comics. I mean, it's Detective Comics. This is the title that DC Comics is named after, for goodness sake. It was up to issue #881 when the New 52 hit. Next March it would have celebrated its 900th issue. I suppose it still will, but it won't feel like it counts because DC renumbered it.

Even sadder is that just before it was rebooted, Detective (or 'Tec, as some fans seem to call it) was firing on all creative cylinders with scripts by Scott Snyder and art by Jock. Anyone who hasn't read that final set of comics should absolutely track down the Batman: The Black Mirror collected edition and have a read. The reputation Snyder built up with that storyline has absolutely paid off over on Batman, where he's been largely responsible for making it the highest-selling book of the New 52. Back at Detective Comics, we've had Tony Daniel providing both scripting and art for the last 12 months.

Daniel is a great artist - I love his work on Batman RIP a few years back, for example. He's never been a particularly strong writer, however, and I've struggled to maintain interest in Detective for this past year. He got better - the last arc was certainly the most entertaining - but his run has felt marred by messy storytelling, lacklustre characters and a lot of shock-horror moments that have felt fairly distasteful. The biggest of these shock moment was having the Joker's face cut off to provide a water-cooler moment at the end of issue #1. I suppose it worked on some level, because a lot of people I know talked about it. Unfortunately most of them talked about how tasteless it was, and how they weren't going to buy Detective Comics any more. 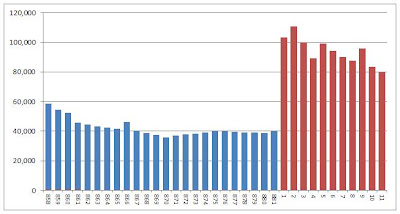 The sales tell a slightly different story. This is a book that opened in a massive way: bumped off from just under 40,000 copies at issue #881 to over 103,000 for issue #1. Thanks to that shock ending issue #2 actually sold 8,000 copies more, although it looks like all of those readers and then some left again immediately afterwards. Since then the comics been in a relatively slow decline. Issue #11 sold just under 80,000 copies, about 22% down from launch give or take. That's actually a much healthier decline than a lot of other top-tier titles such as Batman (down 32%) and Green Lantern (down 44%).

One thing I do find interesting is that the Night of the Owls tie-in at issue #9 didn't have the same "bump-up" effect experienced by other Bat-titles. Nightwing sales bumped up 8% between issues #8 and #10. Batgirl sales bumped up 7%. Detective Comics sales actually dropped down by about 5% - some new readers came and gave it a try, and didn't like what they saw.

Of the 52 titles (well, including the second and third wave we're up about 62 now, aren't we?) Detective Comics is probably the second-best selling of what I'll rudely call the "crappy books", behind Justice League but ahead of most of the other poorly written titles. It's getting a new creative team seen, so this may be a book to revist in a few months to see how it's faring.
Posted by Grant at 9:17 AM