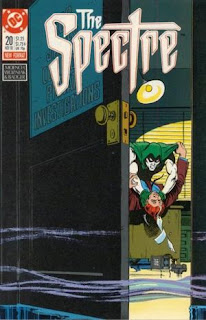 The Spectre is a DC character with which I don't have a lot of experience. He's one of their older heroes, making his debut in 1940's All Fun Comics as the resurrected spirit of murdered cop Jim Corrigan and continuing in one form or another ever since. What I have read of the Spectre has been fairly recent stuff, where he seems less of a superhero and more of an inexplicable force of nature (Day of Vengeance, for example). I also read some of that dreadful period where Corrigan went AWOL and Hal Jordan became the Spectre for a while.


Seriously, is there a period in the character's history in which Hal Jordan is notcompletely tedious and unlikeable. He is easily my least favourite Green Lantern. I would choose a Green Lantern comic starring that sentient planet that Alan Moore cooked up over another issue starring Jordan. I'm a Kyle Rayner fan. He always seemed a likeable guy that I could relate to.


Sorry, this is supposed to be a review of The Spectre.
The Spectre #20 was published in November 1988, and was one of DC's 'new format' titles made available exclusively to the direct market. It was written by Doug Moench, whose Batman work I've mostly enjoyed. It features Jim Corrigan as a private detective hiring a group of new employees to help re-invisage his business as an agency specifically intended to investigate the occult and supernatural. There's a brief action scene in the middle, where the Spectre has a punch-out with someone, but other than that it's a mostly dialogue-driven instalment.

Seeing the Spectre resort to fisticuffs with a villain is just weird. This is almost certainly the oldest appearance of the character I've ever read, and it jars badly with how I've seen him elsewhere. Seeing the Spectre punch someone out feels like the Phantom Stranger leaping into a kung fu fight. It's just ridiculously silly to me. I assume this was how the character used to be for his first few decades of life, but I'm not used to it.

The art by Chris Wozniak (pencils) and Mark Badger (inks) is expressive and loose, in that very typical DC late-1980s style. It's very much in that area of DC that shifted to the Vertigo imprint around this time - had Moench's Spectre lasted beyond its 31st issue I could easily imagine from this that it would have joined Swamp Thing, Hellblazer and The Sandman over in the Vertigo line.


I'm not sure I liked this comic, but part of the problem was a lack of context: it picks up in the middle of a story and ends somewhere in the middle. If I ever track down some of the earlier issues I'd really like to revisit it.