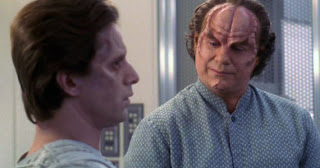 Dr Phlox narrates a letter to his counterpart in the inter-species medical exchange while investigating a mysterious virus that is decimating a pre-warp drive civilization. When his analysis determines that the species' extinction is a natural phenomenon, he finds himself at odds with Captain Archer over how to deal with its future.

"Dear Doctor" takes a strong lead (including its title) from the acclaimed series of "Dear Dad" episodes in the legendary American comedy M*A*S*H. In those episodes Captain Hawkeye Pierce would narrate the episode in the form of a letter drafted to his father. The narration allowed an insight into the character that would be impossible through traditional narrative means, and that insight is copied here in Enterprise. We get to learn exactly how Dr Phlox is finding his tenure onboard the Enterprise because the narration allows him to directly tell us of his experience.

And what an experience. There are so many interesting elements and layers to this episode that I'm not sure where to start.

Let's start with Phlox, since this is entirely his episode. This is the first episode to focus on the character, and not only is he fleshed out, but his species and culture are given some extra dimensions as well. For one thing, he hibernates. For another, he has three wives, each of whom have two other husbands. His species also has a quite disturbing sounding "mating season". We are also provided an insight into Phlox's experience onboard the Enterprise - he is one of two non-humans, and is clearly isolated from many of the crew. There seem to be two exceptions. Firstly, he's established a firm friendship with Hoshi (who's actually upbeat and happy this week), and seems to be edging a romantic entanglement with Crewman Elizabeth Cutler (last seen in "Strange New World"). John Billingsley performs the role remarkably well - his work this episode cements my opinion that Phlox is one of Enterprise's best characters. 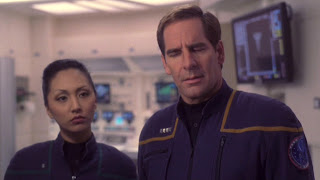 Then there's the dramatic meat of the episode. A pre-warp civilization, the Valakians, is dying of a myserious virus, and after learning that they have already encountered alien civilizations (including the Ferengi - chronologically the first mention of them in the Star Trek universe) Archer agrees to send Phlox down to the surface to help find a cure. The planet has a second sentient specieis, the similar but less advanced Menk, who are kept in reservations by the Valakians and provided with food and shelter. The Menk seem immune to the virus, leading Phlox to examine them more closely.

His findings are that the Valakians are suffering a genetic mutation that will see the species' extinction within a few generations. While he could find a cure by genetically altering their DNA, it would guarantee the Menk - who are rapidly advancing in intelligence - would never have a natural opportunity to become their planet's dominant species. I won't spoil Phlox's final recommendation, or Archer's decision, in this review. Suffice to say it's an appalling choice to have to make, and the episode doesn't pull punches in making a difficult choice.

Also of concern for Archer is the Valakian's request for warp drive technology - something they are centuries away from successfully developing by themselves. The dilemma over whether to introduce advanced technology to a comparatively primitive civilization leads to a conversation between Archer and Phlox that - for all intents and purposes - invent's Star Trek's much feted and ridiculed Prime Directive.

This is far and away the best episode of Enterprise so far. It's one of the best episodes of Star Trek that I've seen. It offers well-rounded and believable characters facing an interesting and dramatic moral dilemma. The final choices those characters make may not be the best ones, and they may not be the ones that their audience expects them to make, but they're well argued, consistent to their beliefs and make for extraordinary television. This is five-star speculative fiction.