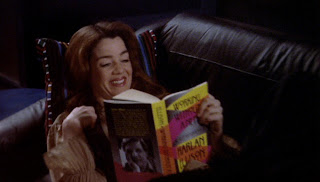 Rabbi Koslov, a close personal friend of the Ivanova family (what's left of it - Susan's parents and brother are all dead), arrives on the station to convince Susan to sit shiva for her father (see "Born to the Purple"). Meanwhile an old friend of Garibaldi's also arrives, intent on competing in the mutai, a vicious alien martial arts tournament that often maims or kills its competitors.

Welcome to "Alien Kung Fu Rocky", also known as "TKO". This is commonly cited as one of Babylon 5's worst-ever episodes, although to be honest I've already sad through more than one that was worse since starting this re-watch. I wouldn't call this episode dreadful, but it's certainly an oddly breezy and cheerfully incompetent hour of television.

The first flaw: there's a bizarre juxtaposition of storylines. On the one hand we have Ivanona refusing to come to terms with her late father's death, and her troubled relationship with him. On the other hand we have Garibaldi's friend Walker Smith wanting to beat the crap out of some aliens. The two don't mix, particularly during the climax when we keep cutting between Ivanova peacefully sitting shiva and Walker kickboxing with some lumpy-headed martial artist. Usually if you mix your climaxes like this you do it to compare or contrast the two storylines, and show the common threads between them. Here they're mixed together because... actually I have no idea why they're mixed together. It's strange.

So, the Ivanova storyline: it's great that they dedicate half of the episode to Ivanova, and fleshing out her personality and background. It's also great that they cement a close friendship between her and Sinclair. It's not so great that they saddle her storyline with a comical Rabbi figure. I am by no means an authority on Judaism and Jewish society, but it seems to me like Rabbi Koslov is essentially every cliche and running joke about Jews rolled up into one character. We have the "oy vey" lingo, the incessant meddling in Susan's personal life, fretting over whether alien fish is kosher, and so on. As I said, I'm not an authority - maybe Koslov is an accurate representation of what Jewish religious leaders are like - but it felt tokenistic and cliched to me. I do like that they've introduced real-world religious beliefs into the series again: it's not as if interplanetary travel and contact with alien civilizations will immediately make these beliefs go away (as Star Trek appears to posit). I hope in future they do a better job of it. 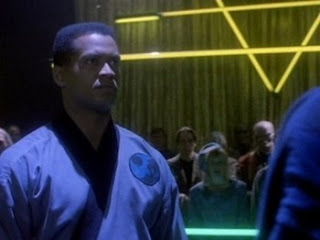 The alien martial arts subplot is very 1980s. Simplistically characterised, two-dimensional and mostly predictable. The only place where it surprised me was in its Rocky-esque climax. Given the overall tone I've seen in Babylon 5 so far, I absolutely expected Walker to die in the ring. It seemed obvious that the episode was about hubris, and pride leading to a fall - only there's no fall. Walker manages to score a draw with the mutai champion, and in a trite epilogue the assembled fighters agree to let humans fight freely in the tournament in future thanks to Walker's bravery. Much is made by fans of Walker twice warning Garibaldi to "watch your back" - the first time it's because Garibaldi really should have been watching his back, the second time it's because the series demands obvious foreshadowing (see "Chrysalis", in a few weeks).

So, a few final observations. Babylon 5 has a regular credited cast of 11 actors, and in "TKO" we see three of them. I think that may be a new record. I also found myself fixated on Ivanova lying on her couch laughing uproariously to a book by Harlan Ellison. I've never seen anyone laugh so uproariously to a book, and certainly not the autobiography of Ellison - maybe it was a particularly funny anecdote about [COMMENT REDACTED TO AVOID LITIGATION FROM SCIENCE FICTION'S MOST LITIGIOUS WRITER]. I'm also surprised someone on a space station light years from Earth actually bothers with paper-based books.

So "TKO" is not good. It's not blindingly awful, but it's eminently missable. 14 episodes in, and five of them have been good. Season 1 now scores 36%.
Posted by Grant at 9:44 AM