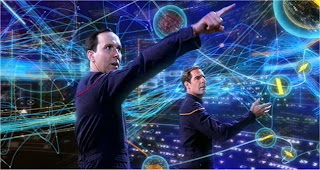 Remember that huge open plot thread that Enterprise opened way back in its pilot episode? Temporal cold war, the Suliban, mysterious shadowy figures manipulating... something. It's finally back, arguably quite a bit late for me to fully care as much as I should.

While the Enterprise encounters a travelling group of pilgrims waiting for a stellar flare, one of Archer's crew reveals he's from 900 years into the future and has been working undercover on the ship for the past few months to fight in a 'temporal cold war'. At the same time the Suliban operative Silik has infiltrated the ship, and is on the hunt for the temporal agent.

Given that Enterprise was co-created by Brannon Braga, it seems inevitable that the series would soon fall into time travel shenanigans. Braga is the writer of such timey-wimey Trek classics as "Future Imperfect", "A Matter of Time", "Cause and Effect", "Timescape", "All Good Things", Star Trek: First Contact, "Flashback" and "Future's End". He subsequently worked as executive producer and head writer on Flash Forward and Terra Nova. When he was hired as a writer for 24's seventh season, I genuinely had a suspicion Jack Bauer was going to get stuck in a time loop or something. 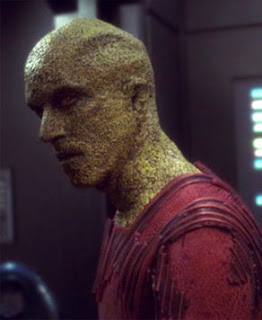 So surprise, surprise: the Enterprise "arc" is about time travel. On a nuts-and-bolts level my only real objection is that the storyline hasn't been given enough attention. This is the first mention of the temporal cold war since the pilot, and for TV viewers in 2001 that was months ago. What's taking so long? These people are travelling through time. Why not just, as T'Pol sensibly suggests, go back one more day and fix the events of the episode before they even happen? There's a tightrope you walk if you have your characters point out the implausabilities in your script. I think "Cold Front" may have slipped and fallen into the net. Fortunately the episode is scripted and directed with enough gravitas and tension to make it an enjoyable enough watch in the end. It's got quite a clunky beginning, though.

The second half is a fairly tense hunt for Silik through the Enterprise, and it's got some really dynamic moments of action and intrigue. To be honest, the main thing that lets it down is that it's part of this lacklustre, slightly lazy story arc. Enterprise needs to commit to it, or drop it, but it's not going to end well doing this on-again, off-again thing. I did want to mention that I quite like the Suliban. They've got a wonderfully creepy look to them, and I love the idea of a species that regularly has implants and mutations engineered to give them mission-specific abilities.

So, with qualifications, I'm giving "Cold Front" the thumbs-up. That's seven good episodes out of ten, or 70%.
Posted by Grant at 9:45 AM