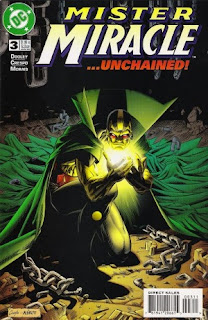 Mister Miracle was originally the longest-running of Jack Kirby's now-legendary New Gods comic books, published from April 1971. Escape artist Mister Miracle was secretly Scott Free, super-powered God of the Fourth World. In an attempt to bolster its sales, Mister Miracle shifted away from pop art mythology to more conventional superheroics, but sales didn't pick up and it was cancelled after 18 issues. Like most superheroes, however, Scott Free hung around, joined the Justice League of America and eventually picked up a second monthly series that ran from 1989 to 1991.

This third volume of Mister Miracle was written by DC editor Kevin Dooley, whose editorial work had included both Legends of the Dark Knight and Green Lantern. The art was provided by Steve Crespo (pencils) and Marcio Morais (inks), and the comic was published with vivid colours on nice high-quality, glossy paper. It only lasted for seven issues, at which point all New Gods-related titles were cancelled in favour of the Jack Kirby's Fourth World comic (which itself lasted 20 issues). The character was later re-developed by Grant Morrison as part of his Seven Soldiers set of miniseries.

I've been re-reading Mister Miracle this past weekend, and issue #3 of Volume 3 seemed as random an issue as any to write about. It's fairly typical of Dooley's run: we're neck-deep in the New Gods here, with Scott refusing to take up the mantle of his dead father and lead New Genesis against its sister planet Apokolips. Things have not been going well: Scott's wife Barda is dead, and in an attempt to free her from the underworld he has had to return to New Genesis and reluctantly accept the godhood that has been promised to him.

This is a very typical comic book of the 1990s. It's brashly designed and aggressively colourful, with a limited number of panels per page and a very action-focused approach. The character designs are, by and large, unchanged since previous volumes of the series. Due to the limited number of panels the comic does have a tendency to rattle on a little too fast - this isn't a book that takes much time to read. It is quite engaging and enjoyable, however, provided you're already a fan of Kirby's New Gods - and therein lies the rub.

I think there's a shocking flaw at the epicentre of the New Gods, and that is that they are wilfully limited characters. A good planet of Gods opposing a bad planet of Gods, and they basically spend their time heading back and forth having fistfights with each other. Maybe I'm reducing that a little unfairly, but I've always found that the New Gods are at their best when incorporated into the broader DC Universe. Orion and Big Barda both made excellent members of the Justice League during Grant Morrison's JLA run, and Darkseid's been a fabulous villain for the DCU for decades. When presented on their own, with what seems even for comic books to be a ridiculously fast revolving door of deaths and resurrections, they not quite engaging enough to support their own book. They look fantastic. They read less impressively.

J.M. DeMatteis' run in the 1980s (Miracle Man Volume 2) was a lot more creatively successful, I think. It took a version of Scott from Justice League International, placed him and his wife Barda into suburban America and allowed him to have a much broader range of interplanetary and superheroic adventures. The character looks great, and is fun to read about, but if DC ever plan on publishing a Mister Miracle Volume 4 as part of the New 52, I really hope they look at broadening his scope wider than it is in this third volume.
Posted by Grant at 2:47 PM