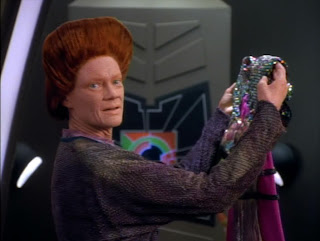 A damaged spacecraft comes through the wormhole, bringing with it representatives of an exiled civilization. Before long the station is overrun with refugees, who have fixed Bajor in their sights as their final destination.

One of the strengths of the original Star Trek was its use of science fiction adventure stories to tell allegories about real-world social issues. It's something that became less significant as Star Trek moved on, and the franchise for the most part replaced allegory with character and continuing narratives. "Sanctuary" is a surprising step backwards: it's a story about refugees, and what to do with them, and how the selfishness of a government can be to everyone's detriment. Had it not been produced in the USA in November 1993 I would have sworn it was a thinly veiled swipe at Australia's refugee policy. That's the beauty of a good allegory - it can be many things to many people.

The Skrreeans (two Rs and two Es - I looked it up) are a nomadic species, cast out from their own world by another displaced civilization - and they were cast out by a third, called the Dominion (there's that name again, for the second time this season). The Skrreeans are on their way to a 'promised land', a planet somewhere in the universe where they're destined to reside. They think that planet is Bajor. The Bajorans want none of it: the provisional government is as shaky as provisional governments usually are, vast tracts of the planet have been rendered uninhabitable by the Cardassian occupation, and a famine is affecting several parts of the planet. Several million refugees isn't something they're willing to contemplate.

It's a testament to the writing of Deep Space Nine that this story doesn't have a happy ending. The Bajorans don't budge, and the Skkreeans are forced to move on to the 'non-promised land' of Draylon II. Their de facto leader Haneek (Deborah May) ruefully points out that the Skkreeans are a race of farmers: had the Bajorans let them in, perhaps they wouldn't have had a famine any longer.

Deborah May (of St Elsewhere, ER and Murder One fame - well probably not fame, but she's had prolonged guest appearances in all three series) plays Haneek very well. She is a sympathetic character, yet manages to play the part as quite alien and unfamiliar as well. The supporting cast are also rather good, and keen viewers might enjoy spying out Leland Orser (ER, Seven, Alien Resurrection) as one of Haneek's bondsmen. Aron Eisenberg (Quark's nephew Nog) gets some good material as well, further cementing him as a likeable addition to the series' extended cast.

If there's something that frustrates me here, however, it's the Skkreeans' culture. It's established that they are a matriarchal civilization, with mature, responsible female leaders, and short, immature, hot-heated male servants. Women don't have a single husband, they have multiple men bonded to them - the women act as simultaneous domineering lovers and de facto mothers. It's a really tacky trope of bad science fiction to create a strange 'mirror world' version of a patriarchal culture, where the subtle control mechanisms of patriarchy are replaced by in-your-face 'men are like slaves' hysteria. Star Trek's been guilty of it several times, and it's patently ridiculous every time. As Germaine Greer said: 'The opposite to patriarchy is not matriarchy but fraternity', and I feel like I'm still waiting to see that represented properly on screen.

Overall, however, "Sanctuary" is well-performed, mildly provocative and ultimately a little heart-breaking. It's rather sad we never get to find out what happens to the Skkreeans next. Ten episodes in, and there have been eight good instalments of Deep Space Nine's second season: that's 80%.
Posted by Grant at 9:09 AM