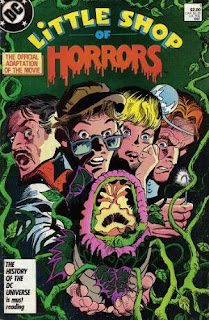 This one is quite frankly bizarre. Tie-in comics were a big thing in the 1960s, 1970s and 1980s, with each Hollywood blockbuster accompanied by an obligatory comic book adaptation. By the 1980s these adaptations were pretty much the dominion of Marvel and DC. I remember reading quite a lot of them as a kid - back then it was one of the easiest ways to re-experience your favourite film.

This, however, is a really odd one. It's an adaptation of the comedy musical starring Rick Moranis and Steve Martin, except of course being a comic book it can't be a musical. The film relied a lot on its cast to generate the humour, and without the performances Little Shop of Horrors becomes less funny and more horrific. It's essentially played straight, and that makes for one bizarre adaptation. If anything it's more like those 1950s EC comics that got Fredric Wertham so hot under the collar.

The comic is written by Michael Fleisher, who - aside from Jonah Hex and Conan the Barbarian - wrote quite a few of these film-to-comic adaptations. Here he adapted the screenplay fairly liberally, dropping in lines from songs in re-arranged prose forms. Steve Martin's song about being so sadistic he had to be a dentist is a lot more confronting when it's treated seriously.

The art is by the legendary Gene Colan, with Dave Hunt. It doesn't really reference the film too closely at all, so I suspect they either had limited access to production footage and stills or lacked the legal permission to use the actors' likenesses.

This is one of the weirdest comics I've read this year. It's not exceptionally good, but it's not very good for all of the reasons that make it so fascinating. Why on Earth would you adapt this film into a comic book? Who thought it was a great idea? It's just strange.
Posted by Grant at 10:21 PM